Update (4:30 PM): Pokemon Sunday just finished airing and didn’t really reveal anything too significant. You can apparently input your birthday into Black and White and when you go to the Pokemon Center on your birthday, the nurse will give you a special message. You will also receive a cake in Pokemon Musicals if it’s your birthday. I have uploaded a very low-quality video of the segment to YouTube (forgot to adjust my settings). Next week, Junichi Masuda will appear on the show and is going to reveal a ton of game info.

Lately I’ve been doing everything I can to avoid posting rumors and unconfirmed images from Japanese forums such as 2ch, but it seems this rumor now has some weight to it. A few days ago, the supposed evolutions of Tsuutaja, Pokabu, and Mijumaru appeared on Japanese forum 2ch; the person who posted the photos said nothing beyond stating they are the starters’ evolutions. Since then, there has been a lot of controversy over whether the four Pokemon are real or not (we already saw Tsutaaja’s and Mijumaru’s evolutions on the anime character sheet, so technically it’s only four new Pokemon). The photos of the evolutions from 2ch are below. If their appearances shock you, check out this post on our forums!

Three days ago, the webmaster of the Spanish Pokemon site Pokexperto, Melkor, received word from a “special source” that the evolutions on 2ch are real and thus posted them as such. The website has posted information from this special source before and it has turned out to be true, so I had reason to believe Melkor was telling the truth. In conferring with him today, I was able to see some of the material the source had given him, including a sprite of Tsutaaja’s final evolution (which matches the photo) and a sprite of another Pokemon. To test if the source was giving Melkor genuine images and to test if Melkor was telling me the truth, I asked him to describe the appearance of the covered-up Pokemon from the Pokemon Musical screenshot on the official Black and White website; he gave me a very specific description on the spot, and I’ll just say one word: eyebrows. If the description he gave me is true, his source and the starters below will be validated. Regardless, you obviously have the choice to believe the legitimacy of these evolutions or not; after all, nothing is totally official until Nintendo reveals them.

Additionally, an image of a new Pokemon was just leaked on 2ch: it’s apparently a blue Yanappu named Baoppu! According to the person who posted it, there will be a monkey trio in the games: Hiyappu (Fire), Yanappu (Grass), and Baoppu (Water). As you can see below, Baoppu’s head is slightly different than Yanappu’s, so the three monkeys will obviously differ in appearance. Could these be the gimmick Pokemon used to promote three-on-three battles like how Plusle and Minun were the gimmick Pokemon for two-on-two battles? It makes sense considering Acrobat is an attack made for three-on-threes. These three Pokemon will apparently appear in Dento’s Gym. 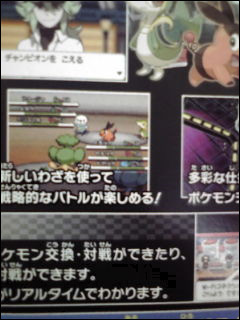 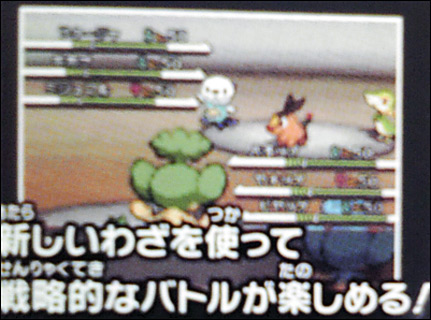