Update #3 (5:00 PM) – Details on Complete Burn added below. | Update #2 (4:45 PM) – Added attack and ability info. | Update (4:30 PM) – Added low-quality video of the Victini footage below. Whoops, you can see part of my IM convo with Shakepeare regarding Undaunted scans. XD

Pokemon Sunday just aired some game footage of Victini, revealing that you encounter and capture it inside a house at the “Liberty Garden Tower,” a place you can visit once you obtain the Liberty Ticket. The Victory Pokemon knows the attacks Complete Burn, Quick Attack, Endure, and Confusion; Complete Burn was demonstrated on the show and burns all of your opponent’s Berries, making them unusable. Its ability, Victory Star, boosts the accuracy of its own attacks and the attacks of any other Pokemon you have out on the field with it.

The show also displayed silhouettes of Gigaiasu, Mamambou, and the new caterpillar Pokemon, promising to reveal them next week. This more than likely means the three Pokemon will be featured in CoroCoro magazine, which comes out on the 11th but will be leaked before then (possibly tonight / early in the morning). Guess we’ll find out more about those Pokemon soon! 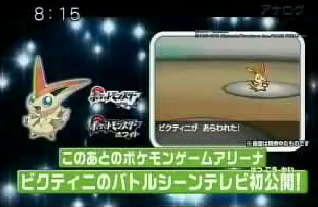 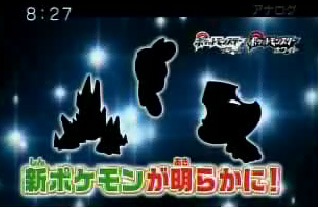