Update (7:00 AM) – A website viewer has sent us the material he used to create Wakoishi, that ugly plant Pokemon, and the sprite of Emonga. So, the images are confirmed fakes, which isn’t too surprising since no one who saw the demos mentioned the two Pokemon.

Three more photos have emerged from the Black and White tour bus demos, revealing Tabunne (タブンネ) for the first time as well as clearer images of Basurao (バスラオ) and Darumakka (ダルマッカ). As we said the other day, Tabunne is a Normal-type and at Level 10 knows the attacks Growl, Helping Hand, and Double Slap. Basurao is a Water-type, knows Aqua Jet, Headbutt, and Uproar, and is Cheren’s second Pokemon in the demo. Darumakka is a Fire-type and the pre-evolution of Hihidaruma. Its arms and legs retract into its body so that it takes on the shape of a real-life daruma doll. If all the 43 41 Black and White Pokemon we know so far are real, this brings the total number of Pokemon up to 536 534!

Additionally, another blogger was able to play the demo at Haneda Airport and has posted a report, which Sabonea Masukippa has translated below (after the photos). The blogger also saw a “video collection” containing many new shots from the game; as you can see below, the photo of Darumakka, from a different source, seems to have been taken from a video rather than the actual demo. Judging by the shopping basket on the floor and LCD television on the table, it may have been one of the Pokemon Centers (the one in Tokyo has baskets and a TV just like the ones in the photo). Therefore, Darumakka’s shot may come from an upcoming commercial that’s being shown around and that may air soon. Stay tuned!

Finally, CoroCoro has announced that their next issue will be called the “Black Document” and will feature many new Pokemon and storyline details. It will hit store shelves on September 15th, three days before Black and White are released. Considering that there are now 14 Pokemon that have yet to be shown in CoroCoro that we as Internet fans know about, the next issue might not contain many new Pokemon for us, if any. We’ll of course post scans and translations of the magazine’s Black Document as soon as it is released! 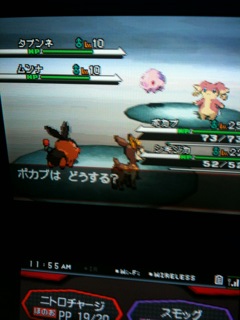 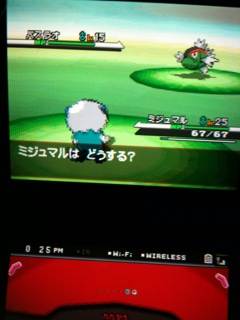 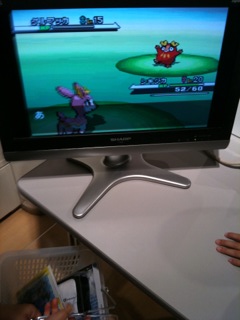