Sorry for the lateness of this update – I was asleep. :p

A smaller version of CoroCoro, CoroCoro Special, was released in Japan today and has revealed that double and triple battles in Black and White will feature new combination attacks. If you select two or more specific attacks in a specific order, they will produce a new effect. The scan that was leaked reveals three new attacks that can be used in this way: Grass Oath, Fire Oath, and Water Oath. Using Grass Oath followed by Fire Oath produces a field of fire that damages your opponents (produce the greenery, then burn it). Combining Fire Oath and then Water Oath creates a rainbow in the sky which boosts the secondary effects of your teammates’ attacks (shoot fire, wet it, produce steam, then rainbow!). Using Water Oath followed by Grass Oath creates a wetland field that lowers your opponent’s speed (wet the ground, throw greenery on it, wetland!). To what extent this new combo feature will be available for attacks is unknown, but we will obviously find out in a few weeks when the games are released. Thanks goes to Heerosferret for the translations and Karubiimunomono for the information! 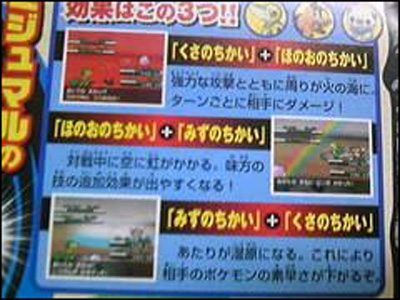