A new Summer Battle Campaign will begin in August in Japan where players will have the opportunity to win Porygon (077/L-P) and Porygon2 (078/L-P) promos. To win them, you will need to get a “Points Card” from participating stores: every time you play a TCG game in a Gym Challenge (Japan’s Pokemon League) or buy a LEGEND-era booster pack, you will earn a stamp. However, you can only earn 10 points in total by buying booster packs and only 10 points per day for participating in TCG matches, though you can also earn an extra point per day if you make a new friend (awww). To obtain a Porygon promo, you need five stamps, whereas for Porygon2, you need 15. The campaign will stop at the end of August, though the promo cards can be redeemed up until September 15th. Translations of the two cards are below courtesy of Bangiras. If you put the two cards together, their artwork forms one image! 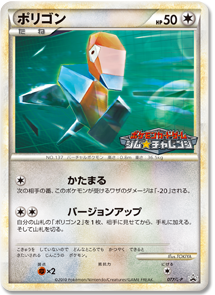 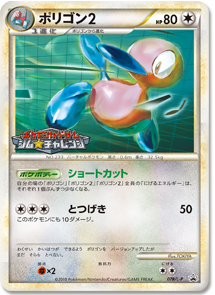 [C] Ball Up: During your opponent’s next turn, any damage done to this Pokemon by attacks is reduced by 20.
[C][C] Version Up: Show a Porygon2 card from your deck to your opponent, and put it in your hand. Shuffle your deck afterward.

Poke-Body: Short Cut
Each of your Porygon, Porygon2, and Porygon-Z in play has its Retreat Cost reduced by 1 Energy.