Update: Now this is nasty. The Zorua and Zoroark you will eventually obtain in Black and White are supposed to be the mother Zoroark and her baby boy Zorua from the 13th movie. But once son evolves into a male Zoroark, and you want more Zorua… ew…

Thirteen more days until I leave for Japan for five weeks! Can’t wait! 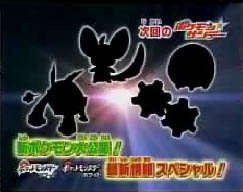 Pokemon Sunday just finished airing – they did not reveal anything we do not already know, as expected after the CoroCoro leak yesterday. They merely showed silhouettes of a few of the Pokemon, which they will reveal in full next week. This probably means next week’s episode won’t have anything new either.

Also, we revisted the CoroCoro scans and need to make a few corrections as well as add some info we overlooked: