Back home from Japan now! 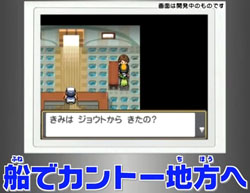 This week’s Pokemon Sunday has officially confirmed that Kanto will be in HeartGold and SoulSilver. Shokotan, the hostess in charge of the remakes’ news, directly stated, “After you beat the Elite Four, you can go to Kanto.” As seen to the right, the show then revealed a clip of Gold after getting off a boat. The blue text at the bottom of the screen says, “You go to the Kanto region by boat” and the sailor he is talking to asks, “You came from Johto?” The boat is the S.S. Aqua, which ran from Johto’s Olivine City to Kanto’s Vermillion City in the original games. Later, the show also revealed the redesigned Magnet Train, which looks very similar to the Japanese Shinkansen bullet train (which I rode!).

Additionally, the first Wi-Fi event for the PokeWalker has been announced in which a special course called “Yellow Forest” can be unlocked. The course is full of wild Pikachu available for capturing. Some of the Pikachu will have a special attack, but it is currently unknown. The Wi-Fi event will span from September 18th to November 10th in Japan.

There should be new HeartGold and SoulSilver information earlier than usual this month since CoroCoro magazine will be released on the 11th instead of the usual 15th. Thanks go to Yaminokame for all of the translations above!