I’m about to make a new Platinum news story so that the old one does not get too long or pushed out of people’s view.

The official Japanese Pokemon Card website has updated with new Galactic’s Conquest images, which you can view below. Bangiras has translated all of the cards as well. This set comes out on October 10th in Japan and is presumably our February English set.

The Basic “SP” (Special) Pokemon we reported about a while ago turned out to be related to Team Galactic. While the owners of the Pokemon appear on the card, they do not appear in the name, other than a bolded “G” at the end of the Pokemon’s name that stands for “Galactic.” Also, the Dialga G LV.X in this set has an attack that uses the Lost Zone, confirming that the new game mechanic is not exclusive to last set’s Giratina.

When this set is sold at stores in Japan, consumers will receive a promo card for every two booster packs they buy. There will be a few different promo cards, but we do not have any information about them at this time. 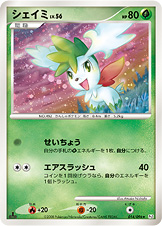 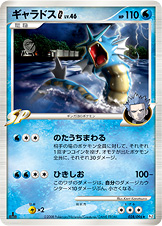 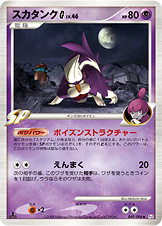 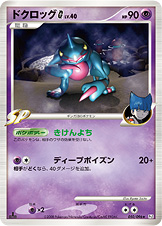 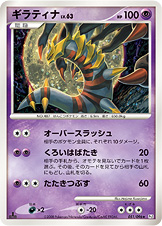 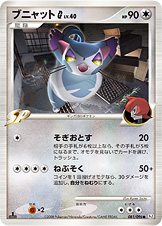 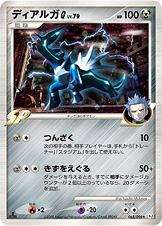 [W][C] Tsunami: 10 damage. This attack also does 10 damage to each of your opponent’s Benched Pokemon.
[W][W][C] Water Pulse: 60 damage. Flip a coin, if heads the Defending Pokemon is now Asleep.

[C][C] Energy Stream: 20 damage. Flip a coin, if heads search your discard pile for 1 Basic Energy card and attach it to Dialga.
[M][M][M][C] Diamond Blow: 100 damage. Dialga can’t attack during your next turn.

[W][C][C] Writhe: Flip a coin for each of your opponent’s Pokemon in play. If heads, this attack does 30 damage to that Pokemon.
[W][W][C][C] Dwindling Wave: Does 100 damage – 10 damage for each damage counter on Gyarados G.

Poke-Power: Poison Structure
You can use this Power once during your turn if you have a Stadium in play. Each player’s Active Pokemon (excluding SP-Pokemon) is now Poisoned. This Power can’t be used if this Pokemon is affected by a Special Condition.

[C][C] Smokescreen: 20 damage. If the Defending Pokemon tries to attack during your opponent’s next turn, your opponent flips a coin. If tails, the attack fails.

Poke-Body: Anticipate
Prevent all effects of attacks, excluding damage, done to this Pokemon by your opponent’s Pokemon.

[P][C] Deep Poison: 20 damage. If the Defending Pokemon is Poisoned, this attack does an additional 40 damage.

[C][C] Overslash: Does 10 damage to each of your opponent’s Pokemon.
[P][P] Dark Wing Flaps: 20 damage. Choose 1 card from your opponent’s hand without looking. Look at the card you chose, and your opponent shuffles that card back into his or her deck.
[P][C][C] Smash: 60 damage.

[C] Chip Off: 20 damage. If your opponent has 6 or more cards in his or her hand, discard cards from your opponent’s hand without looking until there are 5 cards remaining.
[C][C][C][C] Collapse: 50 damage. Flip a coin, if heads this attack does an additional 30 damage, and Purugly is now Asleep.

[M][C] Pierce: 10 damage. Your opponent can’t play any Trainer cards or Stadium cards from his or her hand during your opponent’s next turn.
[M][C][C] Second Strike: 50 damage. If the Defending Pokemon has 2 or more damage counters on it before doing damage, this attack does an additional 20 damage.

[M][M][C][C] Remove Lost: 80 damage. Flip a coin until you get tails. For each heads, remove an Energy attached to the Defending Pokemon and place it in the Lost Zone.