A longer trailer has finally been released for Giratina and the Icy Sky’s Bouquet: Shaymin, providing us with new and extended scenes. In the opening shot of Ash and crew, you can clearly see Dawn’s new Swinub and Ash’s newly evolved Gliscor, though this particular scene was revealed months ago. Giratina’s voice in the trailer sounds scaly and seems to come straight out of a Godzilla movie, and it is thankfully not a reused cry that other Pokemon have used in the past. Regigigas’ role is still not revealed, but it is shown briefly after the trailer has ended. Click the thumbnail below to open the video in a new window, then hit its play button to start it. 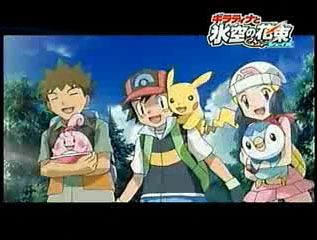