Shaymin’s full Sky Forme image has been revealed on metal Pokemon badges from a Bandai Pokemon “Can Badge Collection.” It looks like a reindeer crossed with a dog, has four legs, and bears what appear to be red wings (that look similar to poinsettia leaves). Will Shaymin replace Delibird as the Christmas Pokemon mascot? 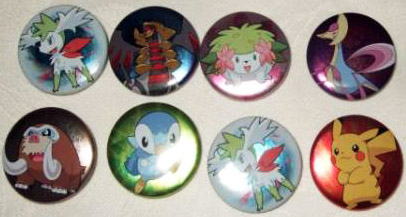 Speculation: Those red leaves look vaguely similar to the red slash in the movie logo. Could they be the same thing?

Thanks go to Heerosferret and her band of Pokemon toy collectors for the product information!