My laptop crashed AGAIN (this morning) as I was writing these news stories, so I had to rewrite all of them on someone else’s laptop. -_- 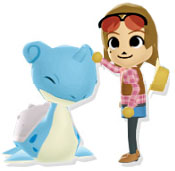 Everyone’s Pokemon Ranch – The Wii software download we learned about last year, Pokemon Ranch, has now been renamed to “Everyone’s Pokemon Ranch” and will be available for download in Japan during March (the amount of Wii points to buy the game is unknown, as is the case with the U.S. download date). The purpose of the “game” is to store your Pokemon on the Wii, like with Pokemon Box. A list of features is below:

The Pokemon Ranch is owned by a friend of Bebe (the Diamond and Pearl Pokemon Storage technician) named Yukari. She (pictured to the right) seems to be able to interact with the Pokemon as well – perhaps she takes care of them when your Wii is off.

New Ending to Darkrai – In going through the credits of “The Rise of Darkrai” from yesterday and using the process of elimination, this seems to be the ending song:

Sarah Brightman is not mentioned in the credits at all, so this is a strong indication that the song, “I Will Be With You,” is not in the U.S. version of the movie and that it has been replaced by the song above. What could be the reason? To use the original song in the U.S. version, Pokemon USA probably has to pay Sarah Brightman a good chunk of money, and it may not be within their budget. The lyrics of the song also do not relate to the movie’s plot or themes, so another reason for its replacement could be that Pokemon USA decided to make their own song that was more relevant. Either way, it is quite apparent we will not hear the song in the U.S. release.

“Oración” and “I Will Be With You” – These are the last two songs for download related to the 10th movie. I am betting most people loved the Oración song that the Space-Time Tower played yesterday, and so now you can listen to it below!

Since the ending song “I Will Be With You” does not seem to be in the U.S. version as described in the previous news story, you can listen to it here as well (to “hear” what you are missing out on). The song plays throughout the ending of the movie, where Dawn competes in the Alamos Town Pokemon contest and loses (shown through a slide show). The Infernape trainer girl comes in first place, the Empoleon trainer comes in second, and Dawn comes in third. After the Contest sequence, we see Alamos Town, Team Rocket in the Baron’s mansion, Alice and Tonio, scenes that played in the movie previously, and Dialga and Palkia roaming the Earth (perhaps foreshadowing their apparent role in the 11th movie?).