EDIT: Credit goes to nYoo from BMG for the first Ken Sugimori picture below.

Turkey Day in one day, 24 minutes. UC applications due next Thursday, ideally Monday. Christmas in… 32 days? Manaphy movie available for illegal downloading in… a month? Half a month? School ending in about… seven months? :( Still lots of things to do before the end of this year! 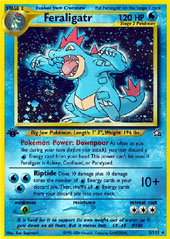 All Four Neo Set Scans Finished – Check out the [Neo Genesis], [Neo Discovery], [Neo Revelation], and [Neo Destiny] scans. Thanks go to Shakespeare for scanning and editing all of them. Tomorrow, or the day after, or the day after that, we will have two new sets – not sure which, though – most likely, EX Ruby and Sapphire and EX Sandstorm.

Ken Sugimori Pokemon Images – Several new official images have been released of the new Diamond and Pearl Pokemon, allowing us to see them in a different perspective than that of the sprites from the games. Click the links below to see the images.