Sorry for not updating for the past few days. I couldn’t log in to the news program, but I found the problem and it has now been fixed.

More Golden Sky, Silvery Sea Scans
New scans have been revealed on the Japanese Pokemon TCG website. They include Granbull, Quagsire, a new trainer card, and full versions of the Unown we posted earlier. You can see them below. 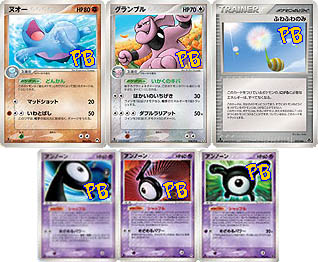 Here is a synopsis of the movie:
“Centuries ago, a huge battle took place between the Reds and the Greens. It was stopped by The Wave Guiding Hero, who used the power of the Tree of Origin to stop it. Ash and friends have arrived in Rota Town, where celebrations for an ancient festival, held in the Oldoran castle, are taking place. Ash and Pikachu enter a battle to select this year’s hero, and after a long and violent battle, Ash wins and become the year’s hero. Suddenly, Mew appears (first as a Ho-oh), and snatches Pikachu, then disappears. Lucario, who has been sealed away for hundreds of years, then appears in front of Ash. What does Lucario want? Where does Mew take Pikachu and how is Lucario involved?

That’s it for today! Keep checking back for the latest info on Golden Sky, Silvery Sea, and EX Emerald!