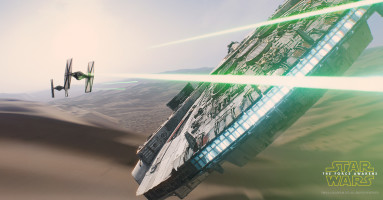 1. It was too self-referential. It relied on references to the past films for the majority of its cheers and excitement. Too many of the laughs came from lightly breaking the fourth wall or lampshading or being flippant. It was too self-aware and knew it was a film. I doubt it will stand up to the test of time or be timeless because of this “tone.” It’s like when you’re writing a script and throw in a reference to another franchise as a plot device, or something. You’re not taking yourself seriously. You’re watering down what you are. You’re not your own thing. You’re acknowledging that you’re part of a time and space and anchoring yourself to it.

2. Can you name one major thing this film invented that will be remembered, quoted, or copied? I certainly can’t. Hell, they even had to blow up a /third/ Death Star for their climax. They had to make a new Vader, who didn’t even need to wear a mask. They had to reuse the droid-with-the-secret-sauce plot. This film refused to stand on its own feet, just like Into Darkness with Khan. It’s living within something or on the coattails of something. This would have been okay if they did it /to an extent/ – after all, it is cool to reference the past – but they went overboard and didn’t bring anything significantly new to the table to balance it. Think of when we went from New Hope to Empire. They didn’t go out of their way to reference the success of the first film or copy it. They just took themselves seriously and continued the story with a completely new chapter. Think of even going from ROTJ to Phantom Menace, with many characters that were in the original trilogy. Sure it sucked, but it was still its own world and acted dignified. This didn’t. If JJ did the prequels, we’d have people making fun of Yoda’s backward talk.

3. I did not care about the new characters for most of the film. I never felt like I got to know them. I thought it was weird Finn and Poe hugged, I thought it was weird that Finn cared so much about Rey – it all felt forced. They seemed to know each other a lot better than what I saw on screen. I wanted to care about Rey but they didn’t throw me much. The yellow Yoda had to go out of her way to tell us that Rey is lonely when there were ample opportunities to show it in the beginning (I know she was *alone* but I never felt she was that *lonely*). And Finn just deciding to change felt so weird and out of place to me, he even had to go out of his way to explain it once or twice (I don’t remember Han going out of his way to tell the audience how and why he changed in the original trilogy). Phantom Menace did a better job at giving us time to absorb the characters than this film.

4. Too much freakin’ exposition and telling us EVERYTHING and how they feel about each other. Even a flashback for exposition, which no Star Wars film ever had. And how many times did Han and Leia say “our son… our son… our son.” The dialogue was just junk. Nothing memorable. Nothing to quote. It just did the job.

5. The pacing was so odd to me. I found myself in scenes without knowing how I got there because everything was treated so “matter of fact” and “just go with it.” The third Death Star came out of nowhere and fired its lasers and we were just supposed to be like “oh okay.” There was hardly any breathing room and after the first third of the film it felt like the scenes all had the same energy level. Just such odd pacing and editing. It wasn’t just the script, it was its execution. This feeling may go away on repeated viewings since I have a mental map of the film now, but none of the other films moved like this one does.

6. The two CG characters looked worse than Yoda from 2005. Reminded me of Marvel. Didn’t feel like Star Wars, especially that tall Snickers guy or whatever his name was (I like the concept of him, though). They totally spent no time introducing him either – again, weird pacing – the shots and scene that first had him did not take time to introduce him. He just popped up. I feel like they went out of their way to do this because the original Star Wars was noted for glazing over everything (Lucas said he went out of his way to /not/ explain much, he just wanted the audience to accept this world and keep the story moving without reflecting on it). I think this was especially a decision on their part with this film since the prequels were noted for being too detailed and “thinky.” So I feel they made a conscious decision to just keep moving without explaining anything or dwelling on it to recreate that movement of the originals. But they went too far, both story-wise and editing-wise.

7. The first sign for me that things were going wrong is that there was no memorable new music, spare what sounds like Rey’s theme, which just wasn’t that distinct (it played at the beginning and end). I’m not sure whether this was because the music had no effort put into it (as in the person who wrote it isn’t as good) or if it was just too hard for it to “hook” on to anything due to the odd pacing and lack of breathing room – as in, it sucking is a symptom of a larger problem with the film. I’ve listen to each of John William’s soundtracks literally thousands of times and none of it sounded like his work. If you ask me, he had his underlings write most of it. There’s no way he sat there and wrote all of that marshmallow music. The only time the music stood out was when it was a reused theme, which might prove that new music would have worked in certain spots, but that it just didn’t have any notable leitmotifs to be memorable enough (as in the new music just isn’t good rather than it being an issue with the film). Overall the music did not stand out and there was nothing memorable. It’s the worst Star Wars OST by far.

8. That red-headed actor, the one from Harry Potter, was annoying and his acting was so out of place. Every time he was on screen my stomach was in knots. He didn’t match the people around him. He felt like he was from a different movie. I wanted to punch him as much as you want to punch me right now for hating on this film.

9. I felt nothing when Han died (not to mention they totally tipped their hand). They did not earn it. And his son was so underdeveloped and annoying with his Vader worshiping and daddie issues. I only wanted him dead so he’d go away, but of course he has to be in two more movies. I just did not like the new characters. I didn’t care about them or their goals. Finn was the only thing that made it watchable.

10. I don’t mean to insult anyone, but I just feel like a lot of fans were so mad about the prequels that they’re going to try to love this film no matter what. I think it’s an average film – I don’t think it’s as groundbreaking as people are making it out to be. It took no risks. It was very “safe.” That’s not what Star Wars was about before – even the prequels pushed the boundaries with technology. Lucas added on to his mythology with new ideas. But this film didn’t, especially since it relied so heavily on the originals. I think this film is almost as bad as the prequels, but in a completely different, not-as-obvious, not-as-insulting way.

11. Overall the story felt like a prequel to a trilogy. I feel like I’m still waiting for the trilogy to start.

12. What were the themes? I didn’t catch any. Something about eyes?

13. What was with that weird rotating helicopter shot at the end? It felt so out of place.

14. A lot of this film is “promising” and “teasing” things to come, but isn’t divulging much on its own. It feels like an advertisement. It’s like a TV episode trying to tease you to come back for the next one. Or like eating kettle corn. You keep eating it and eating it – and it tastes good – but you never get full. You just feel sick from all the sugar. Like I do right now. Hopefully they really know what they’re going to do with the Force mythology and Snickers because this franchise doesn’t have much else going for it now in terms of macro exploration. Even the original trilogy had trouble at the end when they decided to blow up the Death Star again. The only major plot points they have to exploit are family revelations and the Force. Hopefully that’ll be enough to sustain it. As it stands, I felt a lot of this movie was unnecessary and they could have made whatever they’re going to do in episode 2 part of this one. It just feels like it didn’t start.

15. Speaking of family revelations, Rey is either Han or Luke’s daughter. The movie was hinting at Luke for sure – her being a good pilot and technophile, the rebel helmet she had on, the orange X-Wing pilot doll, the dead AT-AT she’s living in, pulling the lightsaber out of the snow, her telling Kylo Ren she sees an ocean with an island, the force vision flashback, yellow Yoda almost telling her when she takes Anakin/Luke’s lightsaber, R2 activating when she arrives, etc. But Han was giving her a lot of extended stares in the film – one of them was even full of regret. I’m not sure if this is because he knows she was abandoned on that planet by Luke and he’s not coming back for her or if it’s because he himself had to abandon her. Han really seemed to like her and even offered her a job on the Falcon, which she was excellent at piloting (like her dad?). So she’s family for sure, just not sure whose. My original theory was that she was Kylo/Ben’s brother (meaning Han and Leia’s daughter) and they had to separate the twins like in the originals. And because Kylo can read minds well, they had to pretend they don’t know her for her own safety (we saw what he could do when she only saw the map). But IDK. Probably Luke’s daughter unless they’re giving us all those references to him to throw us off and she’s really Han and Leia’s daughter. But you can be sure a big revelation in the next film will be something like “I am your father.”

Ugh guys I just really did not like the film. It hurt to watch it. It felt like a chore. I may like it more on repeated viewings, but I just don’t think it’s going to be a timeless film. It feels like a mass produced product now (they’re taking a tip from Pokemon). This is of course just my opinion and I do not mean to insult anyone who did enjoy it. I wish I could be like you.

Okay I’m done. I doubt anyone read this far. At least the next film should be promising.