As we announced back in March, new High Class Decks featuring Zeraora and Deoxys will release alongside Japan’s Lost Abyss. The decks were just revealed in Japan. They will release on July 15th for 2,700 yen each. 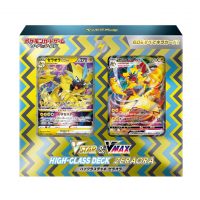 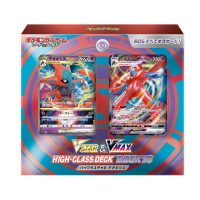 Thanks goes to Toine L. for the translations!

Member
What about Melmetal vs. Mewtwo for Pokemon Go?
D

PartTimeTCGCollector said:
What about Melmetal vs. Mewtwo for Pokemon Go?
Click to expand...

What about them? We already know what they do
P

Member
The new tool card looks interesting. A new way to protect your VSTARs and VMAXs from being bossed up.

Raigetsu said:
When was the last time Deoxys was in the game
Click to expand...

Member
"with the following reprints, some featuring new artwork"

All those cards seem the same as the ones released before.
R

dineinunes said:
"with the following reprints, some featuring new artwork"

All those cards seem the same as the ones released before.
Click to expand...

This is because there's no scans of the new versions yet as far as I know.

Member
Cool. More new artwork we won't have time to receive overseas as the English TCG still rushes to give us a 300 card avalanche in November.

Member
Zeraora V/VSTAR/VMAX - 1. VSTAR is just plain standard attack nothing special, and Snipes a Pokemon V. 2. VMAX is neat, but more of a techable one. Still capable of KOing Vs. 2 Colored enrgy is a problem for the first one especially if you can KO Vs if your opponent has 4 ability mons. Double Turbo would fix it and still capable of KOing majority of Pokemon V, even with the drawback. 3/3-4/3-4

Camo Poncho - might see play as a 1-of to avoid being gusted. 4

Member
Correct me if I'm wrong but the ability would stack having multiple deoxys vmax out right?

TheSocialHam said:
Correct me if I'm wrong but the ability would stack having multiple deoxys vmax out right?
Click to expand...

Unless otherwise stated, it does. But it only covers VSTAR, so that's why. Things like Oricorio and R. Gardevoir limited to 1 'coz it covers the majority of Pokemon.
P

dmein89 said:
What about them? We already know what they do
Click to expand...

Member
The Gengar/inteleon high class decks had alt arts, do we think it is possible these do too?
R

Digg07 said:
The Gengar/inteleon high class decks had alt arts, do we think it is possible these do too?
Click to expand...

Member
The ability of that Deoxys VMAX stacks and applies to all of your Pokemon... you can potentially reduce the opponent's VSTAR damage by 140 if you have 4 and a Radiant Gardevoir in play. Of course they all get shut down by Path, so it's mostly just a fun meme to try that.
You must log in or register to reply here.
Share:
Facebook Twitter Reddit Pinterest Tumblr WhatsApp Email Share Link
Top