The VMAX mechanic will be returning to Japan’s Time Gazer and Space Juggler sets! Pokemon Taiwan has just teased a new Heatran VMAX and Wyrdeer V. They will be fully revealed tonight. 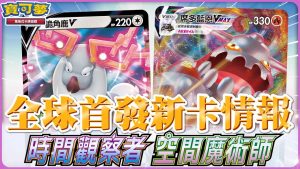 Most fans, including us, thought Creatures decided to retire the VMAX mechanic. No VMAX Pokemon appeared in January’s Star Birth or February’s Battle Region. After all, the new block introduced the VSTAR mechanic. December’s VMAX Climax was the last set to feature VMAX Pokemon, and the name also seemed to imply they had reached their peak. At best, we thought they would only make guest appearances here and there...
Click to expand...

Member
Maybe Melmetal VMAX will be in the Go set since that kinda is Melmetal's game.

Member
I personally like getting more VMAX Pokemon. They're a lot more manageable now anyways with Choice Belt being a thing, and soon we're also getting that Sparkly Hawlucha to also help if any new problematic ones become dominant in the meta like Mew currently is.

Member
People don't remember that when Tag Teams came out we still got normal GX's. I knew VMAXes wasn't done yet.

Member
Radiant Hawlucha has more reasons to use its ability.

BTW, I think Wydeer might get VSTAR alongside Kleavor in the other set.

Member
Not this fan. I didn't think VMax would be fully gone.

Marcia Demme said:
People don't remember that when Tag Teams came out we still got normal GX's. I knew VMAXes wasn't done yet.
Click to expand...

Tag Bolt was the only Japanese set which contained Tag Teams and not regular GXs. So far there have been two Japanese sets with VSTARs and not VMAXs. So it wasn't a bad bet to assume VMAXs were gone.

Member
yeah that's going to be a yikes from me

Member
Told ya so

I had to get mine from Etsy!

Member
Game Freak be like:
who gives a **** about the missing Gigantamaxes let's just give random Pokémon VMAXes!