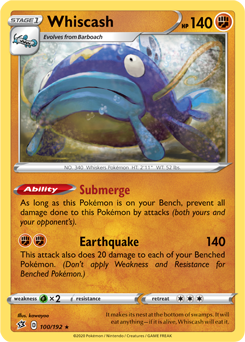 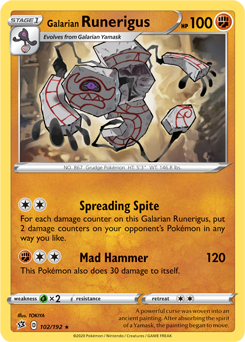 Hello people of Pokèbeach! Today I have a deck that is a ton of fun to play in the current metagame, and, although its matchups are a little bit of a mixed bag, I think it has some great potential nonetheless. Without any further ado, here's the deck:

The main strategy of this deck is to primarily use Whiscash in order to deal 140 damage(!!!) at a much discounted cost of 2 Energy. Be warned though; every time you do so, you hit your entire bench for 20 damage. Note that Whiscash's Ability, Submerge, means that it is immune to bench damage from both your opponent and yourself. This means that Whiscash is immune to other Whiscashes as well as other bench-hitters, such as SnivySaur's GX-attack and, more importantly, Inteleon-VMAX.

So how does the Runerigus line fit into this deck? Simple! Just like that of a middle-school bully, we're going to absolutely beat it into the ground for the entire match.

Look at its stupid face. Why's it always crying? Man up!

Look at its stupid attack. How pathetic! It can't attack without damaging itself!

Beat it up. Slam it into the ground. Purchase a few extra copies of Yamask and beat them with your own fists if you believe that it will help you truly embody your beloved Whiscash. After all, Whiscash is definitely your favorite here, not that stupid Yamask. The most important thing is that, as long as the filthy Yamasks are not going to die, KEEP. WAILING. ON. THEM.

Because, just like real-life bullying, Yamask is going to come back with a seething vengeance that your opponent MUST deal with.

For the low, low price of one Twin Energy, Runerigus can place two damage counters for each damage counter on itself! This is why you want to bring your Yamask and Runerigus as close to the brink of death as possible; by doing so, you can effectively place 180 damage (240 if you were clever with your Big Charms!) wherever you want, no strings attached! Need to finish off a KO that Whiscash couldn't? Need to snipe the bench, but lack the Catcher/Boss's Order to do so? Need to wipe away a metric ton of Lillie's Pokè Doll? Whatever the reason, an exasperated Runerigus has got your back!

Anywho, that's the basic strategy of the deck. There's some more Fighting-type shenanigans in the deck to give it more of an edge, such as Diancie and Martial Arts Dojo to increase damage, and Karate Belt for times where you cannot attach 2 Energy in a turn (maaaaaaybe Bede could be better for this, but I'm very skeptical). The only thing that isn't really super-standardized is the 2 copies of Big Charm, and the reason I run these is so that Yamask/Runerigus can take an increased punishment before having to worry about bullying them to death. Although I would likely change out my Pokemon Catcher for Boss's Orders, I am too broke to do so, and, combined with the fact that Runerigus can exact vengeance on the opponent's bench anyway, it's not too big of an issue right now. Also, maybe I could swap out my Mewtwo for another Dedenne-GX, but, like I said, I'm broke, so I have to hold out for the release of the Pokèmon Trainer Toolkit next month.

The one big piece of advice I can give is to really dig for a Fighting to attach on Turn 1, as the deck loves to start swinging as soon as humanly possible. Even if you have to use Runerigus's Mad Hammer on Turn 2, that's nothing to worry about; putting damage on your filthy, lowly Runerigus is always a good thing. This deck can get going very quickly, and that is a feature that, more often than not, you must capitalize on.

Weaknesses:
- Spread (Are you facing Inteleon VMAX or Dragapult VMAX? Buckle up.)
- Taking a prize lead too early causes Karate Belt to be a dead card
- Little disruption (no Scrapper, sorry!)
- Can whiff Turn 1 attachment, leading to particularly difficult games
- In some matchups, reckless play is required, which could cause the player to discard important resources early

Overall, I'm really excited to see what this deck has in store for the future! The deck is an absolute blast to play and has a lot going for it. Although I feel that its matchup against decks like Dragapult/Inteleon are noticeably weak (especially Dragapult, as it packs the Fighting resistance), the matchups against the other 3 of the "Big 4" (Baby Blowns, PikaRom/Boltund, ADPZ, Dragapult-VMAX), overall feel solid with a careful gameplan; Whiscash stomps all over PikaRom, one-shots Baby Blacephalon AND has the capability to one-shot Blacephalon-GX with Martial Arts Dojo, and comfortably two-shots ADP and Zacian (although some Fighting tricks may be required if they decide to run some damage reduction/healing tricks, such as Mallow & Lana or Metal Frying Pan). With its highly flexible damage spread, Runerigus does things to Doll Stall that can only be described as "sacrilege".

Any and all advice is greatly appreciated!

Get out there and start beating up your very own Yamask! He deserves it!

Member
In the list of strengths, you are forgetting how many good cards right now are weak to fighting types. I think this deck will be really nice soon when dark box becomes a thing. As of right now though, I don't think I have any advice to give. nice deck.

Member
Quite appreciate your idea about the deck. Now we're getting a better Earthquake user than Whiscash, namely Donphan from s4 "Shocking Volt Tackle":

With the best Earthquake abuser ever, wish the deck can achieve some sussess in tournaments
Last edited: Sep 11, 2020

Sword.N said:
Quite appreciate your idea about the deck. Now we're getting a better Earthquake user than Whiscash, namely Donphan from s4 "Shocking Volt Tackle":

With the best Earthquake abuser ever, wish the deck can achieve some sussess in tournaments
Click to expand...