Noble Pokemon are special Pokemon that are said to have received a special blessing that grants them power not held by regular Pokemon. The wardens, like the four characters pictured below, are in charge of keeping watch over these Pokemon and their territory. Recent phenomena have caused these Noble Pokemon to fly into frenzies that make them especially difficult to control–so the Hisuian People seek help from the Galaxy Expedition Team.
It’s possible that this “Noble” Pokemon mechanic will somehow translate to our VSTAR mechanic in the future. The frenzied Kleavor in the trailer features a bright star-like glow.
Artwork from Pokemon Legends: Arceus 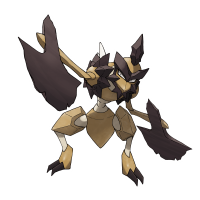 Member
"The dark souls of pokemon"

Member
Scyther already have Scizzor and even Mega Scizzor, they should give the evolution to another Pokemon
Last edited: Sep 28, 2021

Member
Hoping this evolution would have an increased stats,
Scizor should really be changed to a permanent form change rather then evolution unless they somehow also gave scizor a stat boost in the future

Member
Curious about what on earth the arc phone does, hopefully it still has an oldish feel. Love how so many characters are ancestors to pre existing ones as well.

Member
oooooooooooo, the first look(?) at the map and also being able to see some of the pokemon in the ranch is really cute.

Member
Omg, Arezu is an instant favorite for me. Love the design. It seems to be Mars' ancestor. Kleavor doesn't do anything for me. I hope Wardens have special Trainers with mechanics especific to them. The Noble pokémon having some form of equivalent in the TCG is also pretty much a given. Can't wait to see all that.

Ilexon said:
Curious about what on earth the arc phone does, hopefully it still has an oldish feel. Love how so many characters are ancestors to pre existing ones as well.
Click to expand...

It looks like the Arc Phone was literally mooched from Breath of the Wild. At least some of the Pokemon seem cool!

It looks like they depict the noble Pokémon that warden looks after it seems, Mai seems to looks after a noble Stantler and Lian is looking after the noble Kleavor but I can't see the Pokémon on the other two

Member
Oh, boy, a cell phone. What a way to totally not take me out of this mystical land of the past.

Member
Oh- so the Celestica Flute just... gives you the special riding Pokémon? I thought the ability to only ride a Pokémon if you caught them would be a cool incentive to actually catch a large variety of Pokémon for your team.

Does this mean you won't be able to ride on the Pokémon you catch yourself? That's kind of bland and impersonal

Member
I believe in Arezu supremacy

Member
With this game taking place in the past and Dialga being the Time legendary and Palkia the Space legendary I can’t imagine there won’t be some sort of time travel mechanic here. I mean there’s a freaking phone. If they went through the trouble of making the poke balls in the style of old there’s no way they’d just throw in a phone without it being future tech.

Member
I know others have commented on it here, but I just have to go on about that phone. Like, I know the Pokémon universe takes place in a world where teleportation is common place, as far as technology goes, but a futuristic touchscreen phone in Sinnoh 100+ years in the past is a bit too much for me. It’s weird.

If it's invented by someone in this game's time period, HOW? If it’s given to you by Arceus itself like, "Yo, here’s some insane technology from the future in the shape of me," WHY? Pokemon/Gamefreak has been a big fan of dropping the new mechanic from the sky in front of the player for the past two generations. This time around, does something glittering fall from the sky and safely land in front of you again? And someone's like, “Whoa, the Pokemon god gave you a cell phone! Whatever that is. Go forth on your adventure! And I dunno, charge that cell phone with your electric Pokemon or something.” Was it really too much of a stretch to visually show a map and the Pokedex on paper or in a journal? And thus, a time period-breaking device needed to be implemented?

It's not rage inducing or anything, it's just BAFFLING to me. Dark Souls was mentioned in the comments earlier. This is about as jarring as your character checking a cell phone in Dark Souls whenever you want to look at your stats or inventory. I don't know... It's weird. It's weird!
Last edited: Sep 29, 2021