So I'm building a deck around Mewtwo EX and I want it to be competitive, but I'm not planning on winning the world championship. The list above is what I have so far and I will edit it upon receiving your help, and any help that you could provide for a noobie is greatly appreciated!
B

This isn't that clever. Really.

Member
I suggest taking out 1 Gardevoir and adding one Gallade PLS. The more [P] energy on it, the more damage.

Member
Actually Gallade does damage based on all the energy on your pokemon. 20x the number of energy on the side of your field for DCE. Pretty dang good. 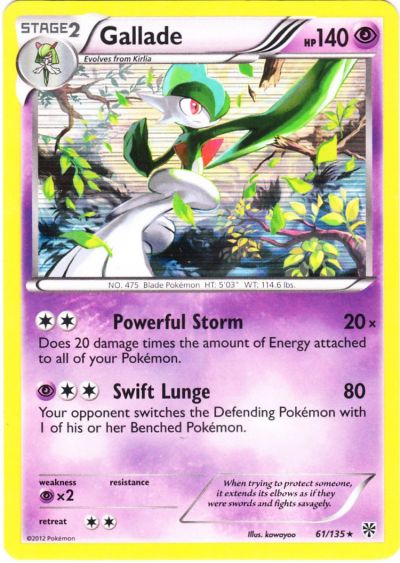 But yes Gallade is a good suggestion. I would probably suggest a spread something like
4 Ralts, 1 Kirlia, 3 Gardevior, 2 Gallade.

4 Ralts is obvious. You need those basics, probably the plasma storm version with flip for paralysis.
1 Kirlia incase you run item lock or anything. At least you can get one out. Psybolt one as well for paralysis.
3 Gardevior. 2 might be okay, but 3 is probably the best bet. One may get prized and then one gets knocked out. You got nothing left.
2 Gallade. It can be a powerful attacker once your field is set up. It can also run on DCE incase Gardevior isnt up yet.

With this you will definitely want a super rod. This deck could run into problems discarding some pokemon. This card will get them back into your deck. Plus it also technically gives you enough Ralts for all 5 evolutions.

Maybe replace 1 mewtwo with 1 sigilyph. That pokemon can do wonders for your match ups. As it can attack in 2 turns regardless of Gardevior with the DCE. Include a silver mirror and you got yourself a wall for most plasma and Ex pokemon.

With that you have 8 basic pokemon and 14 overall pokemon. 18 if you include the rare candy as pokemon, since its all they do it might as well be.

Now you have good access with level ball getting you ralts, kirlia, and sigilyph for no discard. Might warrant at least 1 level ball in this deck.

Skyla would also be key in this deck. For things that run rare candy i like to run around 3 of them. Caitlin is also another choice. Granted this card can get stuck in your hand and basically do nothing. But there are times when you just cant discard your hand. You got your rare candy, a couple of evolutions but no ralts out yet. Caitlin could help you, putting those cards at the bottom of your deck and drawing new ones. But you need cards to use it. Colress on the other hand requires you to have bench pokemon. This is a terrible starting supporter. But mid game it could be game changing and save those cards you need where juniper would just discard everything. Maybe you could go 1/1 Caitlin/Colress. Its really up to you. But Cheren isn't that great, 3 cards meh. Bianca isnt much better since cards can just clog up your hand, and there are times where bianca would change nothing.

So as of now with my suggestions atm leaves 10 cards.

Supporters: 13 is usually a good number for me
4 Juniper
4 N
3 Skyla
2 Other draw support

Trainers: 11
4 Rare Candy
4 Level Ball/Ultra Ball (Test to see what works for you)
1 Tool Scrapper (I suggest always carrying at least one. It can save you. Plus Garbotoxin could hurt your deck)
1 Computer Search
1 Super Rod (For reason above)

Energy: 12 (Unsure though your count could be okay.)
8 Psychic
4 DCE
The remaining cards could be techs for whatever you want. Stuff like silver mirror/bangle, float stone, exp share are all decent choices for their own reasons. Could also go with the obvious Catchers. Hypnotoxic lasers + Virbank to add more damage out there. Switches are also really helpful.

As for pokemon you could easily toss in keldeo ex for 50 or 100 with weakness. Though gardevoirs ability only works on psychic pokemon. It could allow you to have the rushing and float stone out combo. Mr Mime can protect your bench.

Leafeon or anything with its attack energy crush, can be a huge threat to this deck. As your side of the field will be overflowing with energy.

Member
Updated! Thanks so much for the help, looks like I still have room for 5 cards.

Member
AWESOME, ANOTHER GARDEVOIR/GALLADE!!! n.n I LOVE this deck, I actually play it since Gallade came out. XD But anyways, my suggestions:

1 Keldeo-EX/2 Float Stone: This combo is awesome, specially if you want something active and want to protect it by moving it to the bench. And, if you need to attack, just put a DCE and a basic and it's ready to go.

1 or 2 Mr. Mime: Since Gardevoir will be a Bench-sitter, this will force the opponent to Catcher-KO her in the same turn because it will be back in the bench thanks to Keldeo. And maybe a Max Potion tech for this deck could work.

2 Level Ball/3 Ultra Ball: My Ultra Ball used to be Pokemon Communication prior to the rotation, but since it did happenned and there's nothing as reliable to search, use them. And 2 Level Ball will help get your Kirlia, basics, or...

2 Emolga DRX: Almost a MUST in set up Stage 2 decks. Can search not only Ralts, but also your EX's, so it's pretty needed in here.

NO HYPNO-BANK: This decks focuses on OHKO'ing pokemon, so it won't be needed that much. That's what someone said to me on this forums and it has really worked for me, because it gives me more consistency.

2 Exp. Share: Actually my strategy goes around this one card.
-Put it into a benched Mewtwo.
-Active Gallade with one energy(thanks to Gardevoir).
When Gallade gets KO'd, the single energy goes to Mewtwo, helping not to lose any energy nor damage output.

And add a second Scrapper, It helps a lot against Garbodor.

Hope it helped, and good luck with the deck, it's really fun to play with.

Member
Removed sigilyph and emolga. I'll play around with this and see what happens . Any more input is appreciated!

Soundwave said:
Removed sigilyph and emolga. I'll play around with this and see what happens . Any more input is appreciated!
Click to expand...

Actually DON'T REMOVE THOSE!!!! u.u Do this:

-1 Juniper: It's a good Supporter, but in Stage 2 Decks it's really dangerous to run 4 since you might discard valuable resources.
-1 Ultra Ball: Same as above.
-1 Psychic Energy: Max. Damage Output is already 480; removing an energy won't make that big a deal.
+2 Emolga
+1 Sigilyph: It's a WALL against Big Basics decks, can Stall Darkrai and PlasmaKlang(Yes, it's still played, though not a lot) and can hit hard an opposing Mewtwo, since if Mewtwo has 4 Energy, it's a OHKO; and also a OHKO to another Sigilyph that doesn't have any energy, And it also benefits fron DCE so it can be fully charged in 2 turns even without Gardevoir.

Member
idk if you need emolga. I would only put emolga if i had the space. And probably only 1. I dont particularly like emolga since it has free retreat the energy just gets stuck on it. No way to get it back unless it dies. I mean free retreat is good for something you need to have im play for attacking or supporting. but after the first few turns it will most likely not be of any use and just take up precious bench space. Plus its a OHKO for Thundurus for an easy donk.

For pokemon you probably want your sigilyph, mr mime, gardevior, mewtwo, and another ralts for another gardevior as back up or gallade. Maybe 2 mewtwos. if you have emolga out you will be down one of those pokemon for an ideal set up with no way to get rid of it but wasting a turn and a prize. Unless you waste a Scoop up Cyclone on it.