Member
How does everyone go about building their collections?

Do you start with current released sets or from Black Star promos in mid '90's?

Do you look to first have a full set, then focus on getting those Mint to Gem Mint conditions? Or do you build the set one single at a time?

How long do you wait to lay down more money to get singles/sets graded? Do you think grading is over rated and over priced? Or graded condition is not important?

Do you keep them in a humidity controlled room? Light controlled? Are they in plastic trading card binders or archival non-destructive protection products?
Last edited: Dec 24, 2019

Member
For each set I start with a few booster boxes to fill out a good chunk of the non-holo cards and reverse holos. Then I get the non-GX,V, what-have-you, cards as singles, then playsets of trainers, then singles of the GX/V. By this point it should be apparent which Pokemon might actually be good, but not so late that prices have started to reflect that fact and I get playsets of those. Only then do I start gathering up the Full Arts. I get promos as singles or some times in the 3-pack or register blisters as they come.

Condition of the cards rarely matters to me (unless they are way off center or something) and I don't bother getting them graded as re-sale isn't the point of my collection.

As for storage, I keep my cards in 18 pocket per page side loading binder pages (penny sleaving the foil cards), in appropriately sized D-Ring binders, stacked flat in cedar lined drawers and a small container of desecant packs. Weird thing I've found though is that the plastic in binders does NOT LIKE the cedar touching it directly so I have to put a layer of old binder pages down to take the hit. The cedar causes the plastic to wrinkle up for some reason. Full arts go in an 18 or 24 pocket per page zip binder (I like the BCW ones) in Dragon Shield sleeves for storage.

Member
Ten years ago you used to be able to complete 95% of a set from buying a booster box, so I got into the habit of buying 1 booster box per set since Emerging Powers and continue to do that even though it really makes no sense after Gen 7's ultra rare extravaganza came along. (You can buy booster cases and still not even complete 1 SM set.) Then I would buy the rest of the set as singles. The one time I bought a second box of a set because the first box was terrible (Dragons Exalted) ended up being a further waste of money so I've never double dipped since.

I was collecting from day one English but took a break for about 6-7 years from mid-Neo until Platinum. During Gen 4 I kept up with the new sets and during Gen 5 I finished off the backlog of older sets that I'd missed during the hiatus. Thankfully, this was before PoGo brought a whole bunch of nostalgia eyes back onto the TCG and the cost of older cards/PSA hype/humble bragging on social media trends all exploded.

For storage I do it by set. This method is boring to me and I wasn't wild about doing it at first, but I collect complete sets and it's the most practical method. If the TCG ever actually dies, I'll probably go for a Pokedex method like I did during Gen 4-5.
O

Member
Here is my approach which I believe to be thorough, but I am sure there can be room for improvement:

For collecting -
This goes first to collect the full set in whatever condition is affordable, then upgrade singles to get full collection Near Mint (NM+) to Genuine Mint (GM). The ideal end result would be PSA graded card(s) air sealed, in PSA team bags individually, marked as a 9 or 10 - obviously when it becomes affordable.

Member
Now we just need someone to post about how they keep their cards loose in a shoe box and we'll have the full range of collection methods represented!

I usually buy a single booster box of each set as it's released along with the one or two Elite Trainer Boxes that come out alongside it. Even after the massive expansion of ultra rare and secret rare cards in main expansions, I think it's still worth it to at least eliminate most of the bulk, though with the sets getting larger and larger, even that isn't fully covered by a single booster box anymore. And getting the ETBs I do because I also collect those. Sometimes it covers a good chunk of the bulk I didn't get from the booster box. And with both of them it's a real good chance I might get the chase card for the set, which is always a relief to not have to buy as a single. It's a pretty low chance, but it helps a lot when it does happen.


owhl said:
Do you start with current released sets or from Black Star promos in mid '90's?
Click to expand...

I sort of jump around from set to set. I do tend to put more of a focus on the newer sets, but once in a while I get real nostalgic and buy for an older set. Right now I'm putting all my focus on Hidden Fates because I know those cards will become real valuable in the future, but following that I kinda want to go back to Gym Challenge or Dragon Frontiers. Occasionally I also just buy random one-off cards because I kinda want them. Like a random card from the HGSS days or something. Sometimes they're not even that valuable. I just like the card. Haha.


owhl said:
Do you look to first have a full set, then focus on getting those Mint to Gem Mint conditions? Or do you build the set one single at a time?
Click to expand...

I rarely add a card to main collection if it doesn't meet my standards. In general this means that it has no blemishes and the centering is good. If one border is more than twice the width of its opposite border, for example, I will probably seek to replace the card, though sometimes I use the uncentered card as a placeholder which sometimes leads me to forget I wanted to replace it. In some cases, especially for really old cards, I will add a card to my collection even though it has some very minor edge wear or a really light scratch on the holo. The tolerance for those kinds of blemishes is pretty low, though.


owhl said:
How long do you wait to lay down more money to get singles/sets graded? Do you think grading is over rated and over priced? Or graded condition is not important?
Click to expand...

Most of the time I don't bother with grading. There are some I might go the extra mile for because they're valuable, as I might do for shiny Charizard GX or something, but for me that means it will be an empty spot in my binder unless I plan to get a second one, and I tend to debate if I want to make that trade-off. So far I haven't had any of my cards graded.


owhl said:
Do you keep them in a humidity controlled room? Light controlled? Are they in plastic trading card binders or archival non-destructive protection products?
Click to expand...

My cards are all stored in individual KMC perfect-fit card barriers and put into BCW 12-pocket binders that zip shut. It's not the greatest protection in the world, but it's good enough for me. My binders are color coded by what kind of collection goes inside. For main sets, I use alternating black and white binders. For Black Star Promos, I use green binders. For Trainer Kits, I use a red binder, and for Recurring Promo sets like POP Series and McDonald's sets, I use a blue binder. For other more obscure cards, such as unnumbered energies, winner cards, Art Academy cards, Victory Medals, etc., I plan on using a brown binder, but so far I don't think I have enough of those to justify a binder for them. I'm also debating whether or not to put the unnumbered energies in their own binder.

Within each binder I try to make it so there are no free spaces. So wherever a set ends, the very next slot will start the next set. This unfortunately does mean that a great number of sets are split between two binders, but that doesn't bother me a whole lot.

The bulk of my collection sits in these binders, which have varying degrees of fullness. I also have two ETBs full of other cards for my collection which currently don't have binders, but they will get some once the binder they would go in would be able to be filled enough. 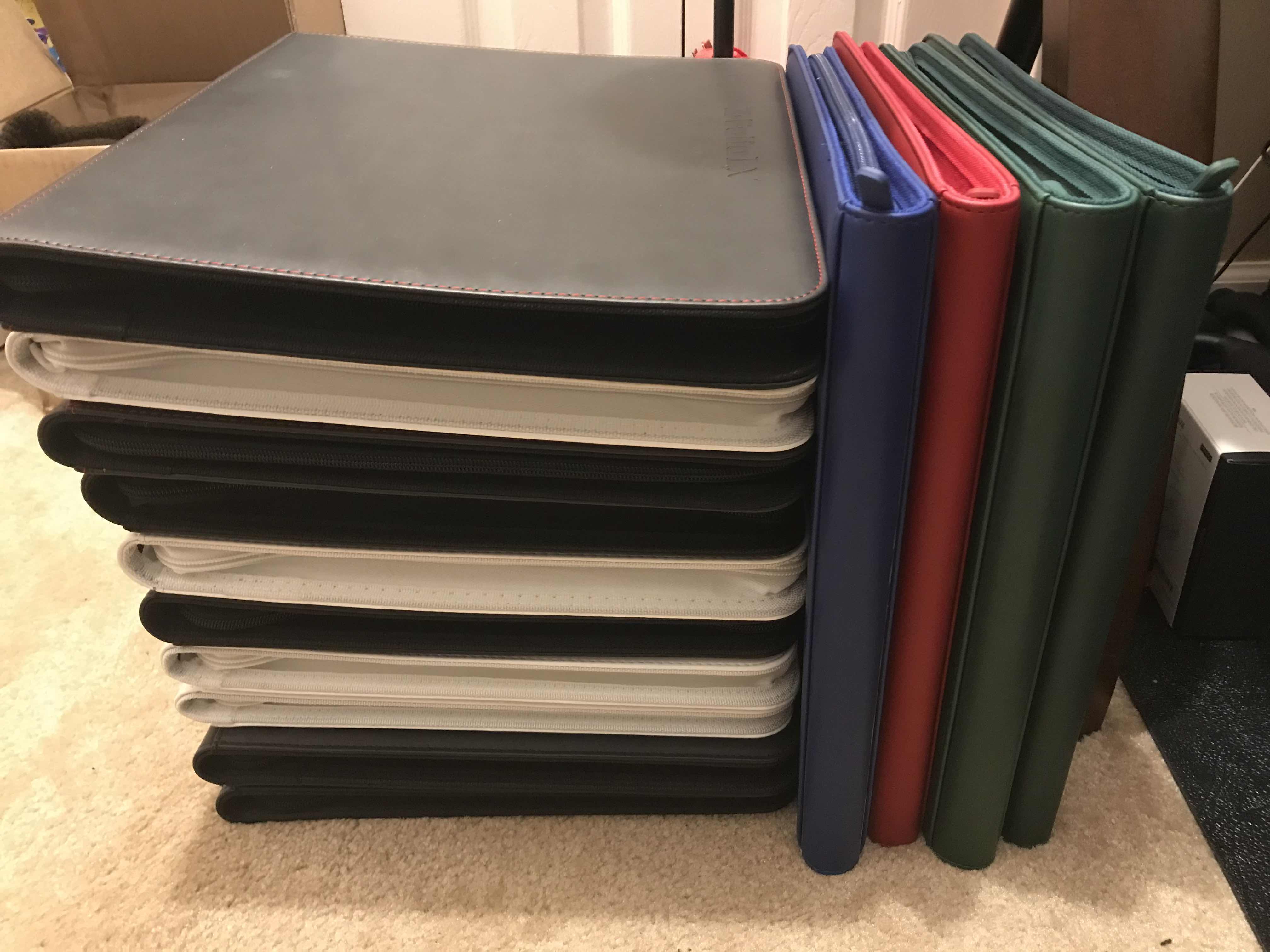