A new Ghost-type Pokemon named Greavard was revealed in a pair of videos on the official Pokemon YouTube channel.


The following information comes directly from the press release for Greavard! 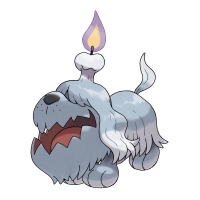 Greavard
Normally, Greavard barely moves, resting peacefully underground. It pokes the topmost part of its head above ground and lights an eerie glow at its tip, then waits for someone to approach. When a person draws near, Greavard jumps out of the ground while letting out a spooky cry that would startle most unsuspecting people—though it doesn’t appear to do this with ill intent.
Greavard has such a friendly and affectionate personality that paying it even the slightest bit of attention will make it so overjoyed that it will follow Trainers wherever they go. Of all the Pokémon residing in the Paldea region, it is known to be...
Click to expand...

Member
They put a litwick on a white dog. Well done guys.

Fun name but too close to lickilicky

Member
Whose a good boi

Member
His name shall be Sherman

Digg07 said:
Fun name but too close to lickilicky
Click to expand...

Member
It's interesting how Lick is a Ghost-type move, but became sort of synonymous with the Gengar line (thinking about Haunter using Lick on Charmander in the original anime intro). Glad to see the move presumably regain relevance.

If it evolves once, I probably won't bother adding it to my team. If there's a second evolution, you know it's going to be absolutely amazing.
Last edited: Oct 25, 2022

(Too close to Poltergeist, just thought I’d put it out there

Member
Oh boy another ugly Pokemon I can't wait to avoid at all costs!

Member
Might be the first decent non-starter design in the game.

Member
How about a pokemon based on someone popular, hmmm Mike Tyson.

chris.n7 said:
Oh boy another ugly Pokemon I can't wait to avoid at all costs!
Click to expand...

:0, I respect you and your opinions, but in the nicer possible way you are wrong.