Boltund will be getting its 2nd V card in S8 Fusion Arts, which is released in Japan on September 24th. It will then become a part of our Fusion Strike set on November 12th. Thanks goes to JustInBasil for translations! 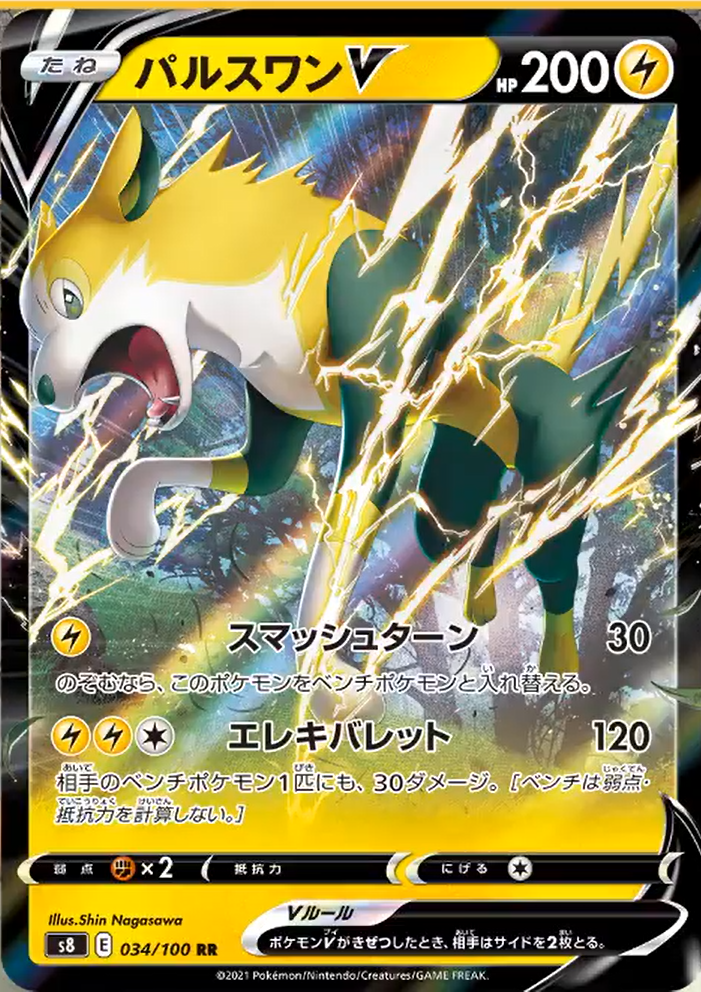 Boltund V – Lightning – HP200
Basic Pokemon
[L] Smash Turn: 30 damage. You may switch this Pokemon with 1 of your Benched Pokemon.
[L][L][C] Electrobullet: 120 damage. This attack does 30 damage to 1 of your opponent’s Benched Pokemon. (Don’t apply Weakness and Resistance for Benched Pokemon.)
When your Pokemon V is Knocked Out, your opponent takes 2 Prize cards.
Weakness: Fighting (x2)
Resistance: none
Retreat: 1
The placement of Boltund V in the set, 34/100, essentially confirms Boltund VMAX being featured in Fusion Arts as well. This is because Toxel is 36/100, and there are not any Electric-type Pokemon between the two, thus...
Click to expand...

Member
Well this Boltund V won't be used with the VMax.
C

Member
Seems worse than the other boltund V, really needs a vmax to be viable I think

Member
I don't know why they refuse to give one of the fastest Pokemon free retreat.

Also, the pack art of Boltund for Fusion Strike doesn't have Dynamax clouds, so I'm not 100% convinced of there being a VMAX.

Mimikeon said:
I don't know why they refuse to give one of the fastest Pokemon free retreat.

Also, the pack art of Boltund for Fusion Strike doesn't have Dynamax clouds, so I'm not 100% convinced of there being a VMAX.
Click to expand...

The pack art for Sylveon and Umbreon didn't have them either, yet they still got them

steffenka said:
The pack art for Sylveon and Umbreon didn't have them either, yet they still got them
Click to expand...

Member
no thank am take boltund v from rebel clash

Member
I'm hoping something at least halfway decent given that Flaffy didn't get a Lightning VMax partner in Evolving Skies - Jolteon VMax doesn't require it since it can attack for [L] and Dracozolt VMax was from an older set.

Member
Boltund V - better wait for the VMAX then. 2-3

Forever trapped in the Lost Zone

Member
I still find it weird how they make a V in one set then in a later set give them a second V and a VMAX like why not just either choose another pokemon (Luxray for example) or give them the VMAX with the original V, has happened for a few cards now and its odd
You must log in or register to reply here.
Share:
Facebook Twitter Reddit Pinterest Tumblr WhatsApp Email Share Link
Top