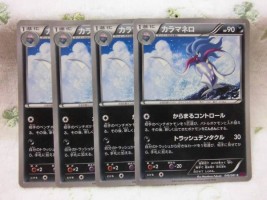 So everyone knows about Junk Hunt Sableye. Sableye in itself even had it's own deck consisting around the simple face he could use and abuse item cards like Hypnotoxic Laser, Enhance Hammer, ect. With Sableye now in expanded there is a card somewhat similar to it. Malamar, a Stage One Dark-Type has an attack somewhat similar to Sableye. For one Dark Energy, you can do 30 damage and pick any card from the discard, show it to your opponent, and put it in your hand. With N gone in the Standard format, this makes it a lot easier to pull cards out of the discard than it used to be. True you may have things like Ace Trainer and Red Card, but I don't feel like Red Card will be played as much and Ace Trainer requires you to have more prizes to make it work. The downfall is that it is a stage one Pokémon which can hurt it's viability in a lot of decks possibly. Despite this, I feel like you should count this card out as a possible common tech, especially in Dark decks. While Sableye did bring two cards back, it didn't do any damage and only brought item cards back while Malamar brings any single card back and does 30 damage. Anways, what do you all think about this card and the possibility of it's usefulness in the new meta?

Member
Hello. I started playing right before the Sableye left standard. I have a deck running a 3-3 line of this Malamar, and have found it to be very strong.

I'll start with his attack that you mentioned. Trash tentacle- In a format where winning the stadium war can mean winning and losing. this card can basically grant you the win for that "war". Just the ability alone to grab a card from the discard pile is enough to end bad hands. Pulling a Sycamore to get out of a bad hand is so strong. I could be wrong, but i do believe VS Seeker wasn't in the format with the old Sableye.(Please correct me if i'm wrong) so you could grab a VS Seeker instead just so you can adapt to what your opponent did during his or her turn. I have also found that the damage output with a muscle band can soften up enemy EX's for when your primary attackers come out to do there work.

His Entangling Control has a lot of potential. With Keldeo soon getting swapped out of standard Malamar will have a lot of disruption potential. Metal type pokemon tend to have high retreat costs. So you could swap out one of his or her pokemon just to force your opponent to spend resources where he or she dosen't want to. Lastly, this Malamar is the only way I know of how to get at Primal Groudon in dark type decks.

I see potential with this card, but with the set just being released a few days ago it will take some time before a definite answer can be said.
Last edited: Aug 17, 2015

Member
I hadn't considered this, but now you mention it I would probably pair it with Crawdaunt, Bats and Absol (the one that moves damage around).

My deck would revolve around using bats and the occasional attack to get KO's, but stall with an infinite amount of hammers and lysandres and what have you from Malamar, while craw daunt helps with the stalling and absol works with bats.

Bats, Crawdaunt and Absol all synergises really well together as they all benefit from super scoop up and AZ which with malamar you can keep in play indefinitely.

As far as control decks go it could be hilarious and quite fun. Maybe a 1 or 2 tech bunnelby.

Member
Skeleton list off the top of my head

3-3 crawdaunt
4-4 Malamar
2 Absol
4-3-2 Crobat
2 Shaymin EX
2 Unknown (because if there is nothing else you want in your graveyard these become a extra free draw each turn)
1 or 2 Bunnelby (ancient trait) maybe...

4 Level Balls (because they can search out almost anything apart from crowbat, shaymin and absol)
3 Ultra balls (for shaymin, crobat and absol, after all discard isn't a big cost to this deck)
2 or 3 VS seekers (you won't need 4 like most decks)
1 switch
1 escape rope
4 enhanced hammer
4 crushing hammer
3 head ringers
3 Battle compressors (important for early card search and retrieval)
2 Muscle bands (to help malamars weak attack up a bit)


Something like that I guess. You can tech in whatever trainers will be great in your local meta in one offs because of the ability to bring stuff back so much.
Last edited: Aug 18, 2015

Member
I would take out the switch and escape rope, and put in more muscle bands to get more damege in. The Crobats and Unknowns add a lot of clunkyness, you dont really need to be moving damage all that much with your ability to pull them right off the bench. Absol EX and trick shovels could work better in my opinion. You dont need to be running so many enhanced hammers. Just one or two should work. With Flare grunt and Xerosic you should have enough special disruption. I would take out some energy, have around 9 i'm thinking. Most of your pokemon only need one energy to do its thing unless you use Absol EX's second attack. I know it sounds weird, but put in the fourth VS Seeker. You can return the vs seeker instead of a supporter card with the Trash Tentacle and be able to have more options after your opponent takes his or her turn. And last. Don't forget the AZ's they are so valuable on keeping your pokes alive and using your Crawdaunt over and over again.

Member
It was just a quick list to illustrate the kind of things the deck might have in it, if you notice it's not even 60 cards (I didn't count how many cards in it), yeah it's clunky and missing a little bit, and maybe could have some fat trimmed. But it wasn't meant to be a playable list, just a way to demonstrate my idea.

Thanks for the input T1meshift, I think the idea has a lot of potential.

Member
I personally see Sharpedo EX, Spiritomb/Malamar (AOR) or Ancient Trait Bunnelby , and possibly Cawdaunt being used. Yveltal may make a come back because of Malamar, the downfall is that it is a stage one. I'd also like to try a deck with Pangoro since it does 80 damage and discards the opponent's top card on their deck.

Member
I have built a Yveltal/Malamar deck and it works pretty well actually. But Darkrai being gone soon, i'm not sure how it will do.

T1meshift said:
I could be wrong, but i do believe VS Seeker wasn't in the format with the old Sableye.(Please correct me if i'm wrong)
Click to expand...

Member
Isn't darkrai (and mew two) getting a reprint soon in that special box set?

Member
M. Mewtwo is basically getting Yveltal's Dark Ball, except you can just slap a DCE on it and already be doing 70 damage. I don't think Darkrai is being reprinted though.