Pokemon Japan just revealed S12 Paradigm Trigger during the livestream for today’s Champion’s League tournament in Yokohama! We first discovered the set’s trademark in January and posted the first information about its cards in June. 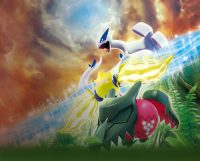 The set releases in Japan on October 21st. It will feature 98 cards before secret rares. As posted before, the set will feature Lugia VSTAR, Unown VSTAR, Regidrago VSTAR, and Regieleki VMAX.
Pokemon Japan also released a piece of...
Click to expand...

Lugia's ability is MAD powerful. You can get a bloody stage 2 card. Not an ex though, but still. Really changes the game and making colorless decks even more Tilted!!

I NEEEEED to know what Unown VSTAR do. Anyone care to translate? 70x for 1 energy is pretty insane.

Member
You forgot the phrase whenever Rule Box was mentioned in the card.

(The amount of weakness doesn't change.)

I got that from PHF Pachirisu

Member
Lugia VStar is a little unfortunate, but it looks cool for sure

Flying Pikachu, also known as the meta, destroys it

Member
I love how Unknown V refers to both the letter of the Pokémon and the rule box.

so much better than what we're getting in English haha

Anyway, Unown VSTAR is probably the most hype I've been for a card in awhile from just the name alone, and its VSTAR Power does not disappoint LOL

Member
Archen/Arcehops - we have to talke abt Archeops alone before we mention Lugia here. It's bad. Good energy acceleration, since we don't have any viable ways to accel Special Energy. Bad thing is its a Stage 2 that evolves from a Fossil. 2/3-4

Lugia V/VSTAR - without Archeops, I looked at this card and say that its just another Pokemon V doing bland 220 and even worse for a 4-energy attack. With Archeops due to its VSTAR Power, my opinion would be different, and it is not just Arcehops, there would be some good Stage 1 or Stage 2s that are legal rn that might took adv of this VSTAR Power like BRS Bibarel or the CHR Greedent that prevents Energy Denial, which is a big deal for Lugia that relies Special Energy. 3/5

Elgyem/Beeheyem - need the shiny one in GO. 2/2

Togedemaru/Morpeko/Pikachu/Dedenne - man, this is depressing! 2/2/2/2

Member
Love seeing a new Mad party tech coming to standard in November. Quite slow for set up but 1 energy for 200 damage/ 60 full spread is pretty insane..

Can't wait to test out this Meta One Prize Deck. I'm not sure Ditto would help much but at least it can substitute for Morpeko & Pikachu after hitting with Dedenne. Rescue Carrier is probably the best card to play here. 1 energy basic deck. Pretty insane. All the more reason to play Flying Pikachu (Which is still legal in standard post rotation, i think), eh?

N's Rhyperior said:
Archen/Arcehops - we have to talke abt Archeops alone before we mention Lugia here. It's bad. Good energy acceleration, since we don't have any viable ways to accel Special Energy. Bad thing is its a Stage 2 that evolves from a Fossil. 2/3-4
Click to expand...

the fact it evolves from the same fossil they've been supporting for a while makes it really, really good imo. if you can first turn the fossil lab stadium, you can have this guy set up on turn 2. alongside a big basic, this makes for some interesting plays.

I fondly remember Gengar&Mimikyu TTGX with omastar and kabutops during the later stages of that era (before Trevnoir). Even just theorizing something similar, if you're guaranteed to start with your main attacker because there are no other basics, and you can power them up immediately? Seems awesome.
Z

Member
kinda getting tired of all the repeated set mascots. it can't just be me, right? I mean...Lugia, Rayquaza, Mew... we just got sets heavily featuring them in the last generation, I get they're popular but it's always fun to try something new. here's to hoping there's a ScarVi set featuring the 3 Musketeers or Jirachi ;]

Member
If the Kabuto line are in the set alongside the Omanyte line, and if all four of them are Water, that will make me extremely happy. So happy that Meditite and Medicham are Psychic type in this set. Love the way the Lightning type for certain Pokémon are cleverly done using Energy requirements.
D

Member
Lugia V - 220 is the bulkier end of basic V Pokémon. The first attack is decent going second. Overall, you will only play it as a pre evolution. 3/5 as a pre evo

Lugia Vstar - ability is nuts. I’m not sure what collorless Pokémon can justify using this ability over something like starbirth. The new Archeops is probably the only contender, bibarel doesnot justify lugia in your deck, but you can pick him up when using the ability. The attack is to high maintence for the low value. Remember that cherens exist, so you can take a hit with this and use the ability and then leave the field 3/5 worth testing out, and could become higher, but we don’t see a good abuser of this ability.

Unown V - this is what I could imagine an Unown V to be like. The second attack is strong in the few situations you can load it up within the late game, but you could load up a KO. First attack is alright as a bursting burn kinda thing. 180 is pitiful, but fighting resicistence is cool to see. 1/5 just a meme

Unown Vstar - hp is very ohkoable. The first attack generates very little value, but as a 1 energy attatchment you can spam cheryl against something like arceus I guess. The ability is nuts, it let’s almost any deck counter big walls, my question is how it works against dragons, as they don’t have any weaknes. 3/5 can pop up to counter tanky decks.

Archeops - that is one of the strongest abilities of all time. You might be a fossil mon, but lugia exist. You can accelerate stuff life powerful energy and DTE. I’m not totally sure what deck wants to use this. Would it be enough to play a 4-3 lugia line plus archeops? Cherens and powerful. 4/5 should see play in some way, the question is in what way.

Morpeko-pikachu-dedenne-togedemaru 2/5 rouge. It is the new hitmon deck, but we have sableye and intel.

Beehyem - love the art. Might be decent in GLC. Not good in standard. It just doesn’t generate enough value.

Medicham - love the ability. We have grant and bibarel to make it consistently good. The attack is becoming less good for each day as it follows. You have mew and urshi but not much more. It is a atrong urshi counter though. 2/5 lacks utility in this metagame

Grove tablet - instant 1 of in any V deck that doesn’t already have a vstar power. The best examples are mew, ice cally, urshi and shadow rider. 4/5 should be great 1-2 of in a lot of decks.

Earth tablet - this is Rapidash V's attack against all mons. It is great for spread decks like urshifu. 3 energies is not low maintence, but doable. 3/5 should be redefining Urshifu but not much more play than that.

Bewear The TERRIBLE said:
Love seeing a new Mad party tech coming to standard in November. Quite slow for set up but 1 energy for 200 damage/ 60 full spread is pretty insane..

Can't wait to test out this Meta One Prize Deck. I'm not sure Ditto would help much but at least it can substitute for Morpeko & Pikachu after hitting with Dedenne. Rescue Carrier is probably the best card to play here. 1 energy basic deck. Pretty insane. All the more reason to play Flying Pikachu (Which is still legal in standard post rotation, i think), eh?

Not sure how the Pika clones tech has anything to do with Mad Party tech. It’s more like that Hitmontop/chan/lee deck, where they have to attack in certain order.
I don’t think this one will see any play anyway. 3x turns each time you want to hit for 200 damage or 60 spread seems straight bad.
You must log in or register to reply here.
Share:
Facebook Twitter Reddit Pinterest Tumblr WhatsApp Email Share Link
Top