Lost Abyss has finally been revealed in Japan! We first discovered its trademark back in November 2021. 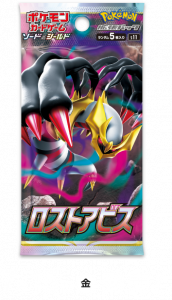 As posted before, the set will feature Giratina VSTAR and the return of the Lost Zone. It will include 100 cards before secret rares. It will release in Japan on July 15th.
Many cards from this set will become part of our September set, Lost Origin, along with cards from Dark Phantasma. Lost Origin was officially revealed today, but no cards were revealed.

Member
I called Banette and I was right. 100 cards before secret rare, there is going to be a heavy cut on Lost Origin.

Member
Giratina is living up my expectation. Satisfied.

Member
I think we had a Comfey card in the early Sun and Moon era.
P

Member
To be honest, I was kinda hoping for more... we now have 2 weeks for 89 cards to be revealed lol

Member
That Cramorant is the most interesting card of this reveal

Member
So Kyurem VMAX will be the Lost Zone VMAX? Since it’s the only one in this set?

Member
This is all actually really cool. Of course, once again, going sicko mode and attaching 8 Energies a turn is "the big payoff" with Mirage Gate, but for now I don't see too many overpowered cards that can achieve that magical number 7 in a single turn. For now it's just Comfey pivot and Colress as supporter, for the reliable options. Hopefully they won't just Fusion Strike the entire mechanic with more cards.

I think if any they're being consistent with the rest of the Giratina cards, who had never made a distinction between Altered and Origin formes.

There's also the fact that despite being called the same, Origin Forme, Dialga and Palkia are somewhat different, because their base forms weren't renamed "Altered Forme" like in Giratina's case, so even though I agree with you in that I prefer to see the Forme distinction in their names, it somewhat makes sense that Dialga and Palkia are being treated different than Giratina? idk

Member
Lost City - will be played in almost every deck, even its not LZ focused. Because it punishes decks like Regigigas that runs few copies of the Pokemon they've used, or tech cards that might need to use later after being KOed. Also not a huge problem on your side since you just not worrying much of losing an attacker or a Lumi, as long as you have a bench space and a spare attacker. 5 Geodudes
Lost Sweeper - maybe losing tool removal isn't a problem anymore. 5 Geodudes
Mirage Gate - now we have to find a way to T1 this card and make it broken. 5 Geodudes
Colress' Experiment - applies to all decks since it gives you a speed draw. 4-5
Giratina V/VSTAR - OHKO VSTAR, OHKO VMAX with a Choice Belt. 4/5
Comfey - first card after 6 years! It's a nice draw card, too. Acro Bike as an ability, except the discarded card can't be recovered. 4 Geodudes
Shuppet/Banette - Stage 1 tho. 1-of in Zoroark for Supporter recovery, and that's it. 2/4
Delphox V - Fire decks still mostly rely on Arceus since Magma Basin won't help you get the 3 energy in a single turn. 3-4
Cramorant - First, 110 is meh even worse if applying no weakness. Secondly, the ability is more complicated to pull off. Thirdly, Hoopa and Moltres does the same attack as this, but the condition is easily met than Cramorant. Sure, Cramorant attacks for free, rather than single energy, but how will you get 4 cards in the Lost Zone, turn 1 going second, especially if you're leading with it? 3-4

PartTimeTCGCollector said:
I called Banette and I was right. 100 cards before secret rare, there is going to be a heavy cut on Lost Origin.
Click to expand...

Cut cards from the previous set might be in Lost Origin, so keep that in mind, boys and girls

Member
Very clever on using aura to designate cards that make use of the Lost Zone.
B

Member
That Delphox art looks terrible. Maybe it'll get an alt art that would make the wait for another art/card worthwhile.

Also wondering whether any PLA trainers will show up now that Colress has taken one of the 4 slots.

beatbox2000 said:
That Delphox art looks terrible. Maybe it'll get an alt art that would make the wait for another art/card worthwhile.

Also wondering whether any PLA trainers will show up now that Colress has taken one of the 4 slots.
Click to expand...

While the Delphox is horrendous, 5ban have at the very least made Giratina looks stunning

Member
And again, they put the most amazing and wonderfull artwork on the English boosterpacks that we rip and throw away, and put ugly renders on the actual cards that we play with.