The official “Draft the World” tournament livestream has started! Eight of the game’s top players will compete in matches that showcase the best decks from the 2014 to 2019 Pokemon World Championships. The event will take place for eight hours today and tomorrow.

Each round will focus on a different World Championship, and all players will use exact copies of the decks that made it to the top tables that year. The tournament will be held in a double-elimination-bracket.
Today will feature the draft and opening three rounds, which will include matches from both the winners and losers brackets. Tomorrow will feature additional drafts and the final three rounds, which includes the Grand Final as well as interviews.
Update: The competitors are using the following decks. 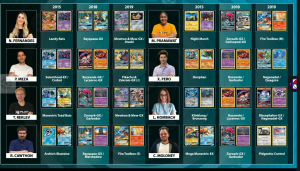 Member
This is where PTCG Live will be announced! I base this on nothing, but that seems to be what Pokemon fans base things on.
S

Member
For a second there, I thought TPCi finally was able to make the draft format work in this game.

Member
You thought it would be a PTCGLive announcement, but it was I, an annou everybody already knew about!