Dark Phantasma has finally been revealed! We first discovered its trademark back in September 2021 and revealed preliminary information about it in March. 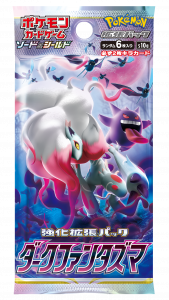 Dark Phantasma will feature Hisuian Zoroark and more Radiant Pokemon like Gardevoir. It will include 71 cards before secret rares. It will release in Japan on May 13th.
The set’s reverse holos will again feature glittery Poke Balls like those in Battle Region.

Member
New Arezu: Search your deck for up to 3 evolution Pokemon without a rule box, reveal them, and put them into your hand. Then, shuffle your deck.
Hisuian Zoroark's VSTAR power is literally Professor's Research
Radiant Gardevoir reduces all damage done to your Pokemon from Pokemon V by 20.

Member
Woo! Some love for Goodra!... but the Hisuian one looks so sad ...

Also gotta get that Sparkling Gardevoir for my binder, and possibly a spare for usage.


These cards aren't bad either....

Member
Haunter/Hisuian Zoroark and Hisuian Zorua/Iscan are illustrated by the same artists. Would've loved to see diversity... But not bad.

That's in late June, bud. Around the same time as PoGo comes to the TCG, IIRC.
B

Member
Komayama doing Iscan is a bit of a letdown. His style does not mesh well with trainers.

Member
If your opponent can't boss around it constantly, H.Goodra Vstar and Gardevoir could be great, taking 3hkos from Mew and Arceus while dealing a heavy 200 damage in return. Has potential to be a frustrating wall deck if you include healing items.

Member
ICYMI, Dark Phantasma has no VMAX on it, as hinted in the Pokemon GO set info.


Arezu- you're just saying that this card buffs Inteleon even more before SSH Drizzile rotates out. BTW, I think you forgot something when it comes to Rule Box being mentioned (Pokemon GX, Pokemon V, etc. have Rule Boxes). 4
Iscan - glorified Samson Oak. 2
Lake Acuity - doesnt really matter. Damage was easily pinged by Inteleon anyway. 3
Damage Pump - pointless for what? 2
H. Goodra V/VSTAR - meh. The energy cost was expensive enough, not even worth using Arceus to accel it. The VSTAR Power is so iffy. 3/3
H. Zoroark V/VSTAR - Hitting Vs with a Double Turbo, plus Gapejaw Bog for dmg boost, I like this a lot. 3/5
Radiant Gardevoir - the ability is quickly ignored anyway. 3
H. Zorua/Zoroark - 3/3
Gastly/Haunter/Gengar - wouldn't be good if the ability was on a basic? 2/2/3-4

Member
Goodra is going to be an absolute Unit with Lake Acuity and Radiant Gardevoir.
And then it just heals itself.
Melony remains solid to accelerate Goodra, or an Arceus/Goodra deck would work insanely well too. Set up, and become the giant gooey road block.

Member
Yay Zoroark card
Also if you simp to Arezu and Irida, you are a necrophiliac cuz they been ded

Member
Considering this set seems to be following Battle Region with reverse holo's and radiant cards would it be safe to assume that there'll be no alternate arts then?
Would be nice as my wallet could definitely use the rest..

Skrubscribe said:
Considering this set seems to be following Battle Region with reverse holo's and radiant cards would it be safe to assume that there'll be no alternate arts then?
Would be nice as my wallet could definitely use the rest..
Click to expand...

Yes, seems to be like there probably won’t be any alternate arts in this set. Will be like Battle Region in terms of secret rares with full arts and gold trainers
D

Member
Gastly - free retreat is nice, but it doesnt make up for the fragile hp. 40 hp is low even with fighting resictence. Grade: 2/5 as a pre evoluton. the free retreat stops u from being 1/5

Haunter - 70 hp is below average for an evolving stage 1. The attack actually is quite good. Imagine if both players brick for 3 turns then u have gotten the same value as espen gx's divide gx attack. Once can also set up numbers. Fighting resistence is good at this hp range. Grade: 3,5/5 as a pre evo u get good value out of it.

Gengar - the ability allows u to look at it as a basic pokemon. This is the way u you set up machamp vmax's first attack that needs a benched damaged pokemon. This is way better than what po town/magmas secret base was for drampa. Being a key piece in a top tier deck is good in itself. But u can also just tech gengar in as a one prize basic mon. I mean as we are reaching more and more regionals with closed lists the more they will play into this attack. 100 dmg on a 1 prize mon is quite nice, and it goes through imunity from damage. This is also the new enpoleon in torterra. Grade: 4/5 this is great. Outside of being a key piece in a top deck gengar will be teched into a bunch of decks as a one prize attacker.

Radiant gardevoir - the reverse hawlucha. The ability is quite good. Not game breaking and nothing that gives u an auto win. Spread decks like jolteon, urshi and kleavor will be the most irritated by this. But unlike manaphy that irritate those decks gardevoir is also effective against stuff like suicune and arceus. The typing and attack aint bad. I mean I wouldn’t include gardi just for that attack, but it is decent numbers. Especially against psychic weak mons. And also this attack + your normal tempo 190-240 low maintence attack takes out anything in the game. And u are also stoping those tempo attacks from ohkoing ur basic Vs Grade - 5/5? Should see tons of play. Teched in for the ability if there are a surtain number u don’t like and the hp isn’t pingable unlike other one prize support mons.

Hisuian zorua - darkness weakness at this hp range is like no weakness. 60 hp would be fragile if we didn’t get fighting resistence. The attack? Remember when people chose to play one of the collect pidgeys in pidgeotto decks? Ya u get this for free. One retreat is good. Grade: 3/5 u still just want to evolve zorua straight away and doesn’t ad utility. But the bulk against (f) and free collect is good, quite good.

Hisuian zoroark - remember trevnoir? Ya that gx attack also discarded their energies to stop them from retrating and was still inconsistent. The second attack is outclassed by other mons is out classed due to being a stage 1. Grade: 1/5 very cute/cool card but not seriously competive.

Hisuian zoroark v - great, a pre evo that has strafe, where have I seen this before? To be fair this attack doesn’t hit for weakness. Then we have Y cyvlone wich is quite good. Grade: 3/5 decent attacks on a pre evo, fighting weakness sucks even if it’s imune in the game.

Hisuian zoroark vstar - arceus vstar vibes. The ability is a great vonskstency boost. Not as great as arceus. But still really great. U no longer need dte. But no energy accel. U get ohkos on vstars wich is nice. The new damage pump is great. This and machamp vmax can be played together to avoid each others weaknesses. Grade: 5/5 will see play. Some arceus decks might split of to use this instead. Such as bird counters and baby moltress. Can’t be played on it’s own.

Hisuian goodra - no weakness is good. 3 retreat is heavy. Attack cost is to weird. Utility is good if u have the enrgies on the boi. Grade: 1/5 pre evo that u just wana skip

Hisuian goodra vstar - real tank. Reduce 80, heal 30 with the cave, center lady/cook for 60/70, no weakness, the ability is great. Ad in the helmet that forces the opponent to pick up an energy. And only give up 2 prizes. That is inzane. U are doing 200/230 every turn as well. The problem is (w)(m)(c) is akward. Dragon’s doesn’t have energy accel. So I belive u need to use arceus. But then u need 4 dte (hyper pot) but that means u will have to use vstar early game for dte to get into game. GG. Ain’t tier one but should replace duraladon as the tanky variant of arceus. Grade: 3-5/5 tanky and justgreat stats and ability. The only bad thing is the attack cost.

Damage pump - Like the item from shining legends this is very niche. But isn’t competing with much else. Decks like zoroark and machamp will most likely need this as they are having game plans around this. Lucario might also want to this. Grade: 3/5 niche but very useful for surtain strats

Lake acquity - alright, goodra prefers crystal cave. But u can’t heal if u are already KOed. There is where this comes in. U might want this as ur counter stadium. Grade: 2/5 if it sees play it’s mostly to bump other stadiums instead of wanting the text itself.

Iscan - meh. Can give some draw. Unreliable if u want more than one non hisuian mon. Grade: 2/5 cute but draw 4 is not the same deal as it would be in 2006

Arezu - like what it promotes. Evo search is weaker than basic search (gloria) wich didn’t see much play due to giving up draw supporter. Grade: 2/5 similar reason to iscan

Member
Goodra + Gardevoir + Lake Acuity already seems like a powerful deck. Add some healing items and you can tank for days.

Member
Now that the ability is translated, I REALLY like that Gengar. It's not as good as Distortion Door Giratina or Propagation Exeggcute in Expanded (granted it has an advantage over those two in that you will never place it in the active if you draw no other Pokemon at the start), but in Standard it definitely helps make Tsareena V more consistent, especially with Gardenia's new supporter also on the way.
Last edited: Apr 15, 2022
You must log in or register to reply here.
Share:
Facebook Twitter Reddit Pinterest Tumblr WhatsApp Email Share Link
Top