Hello PokeBeach readers! Isaiah here, and I am happy to be writing another article for you. Last time, I talked a lot about the Zoroark Stage-1 Toolbox deck and how it faired against the then-current state of the metagame. Since then, quite a bit has changed and several Regional Championships have come and gone, but Zoroark Toolbox has remained a strong deck in the current metagame, with top level finishes at Regional Championships around the world. Aside from the results that Zoroark was able to put up, I think many players could have never predicted the results that we saw, with an unexpected deck winning every single Regional Championship this weekend. Frosmoth Toolbox won in Brisbane, Australia, Vikavolt V / Origin Forme Palkia VSTAR took first place in Stuttgart, Germany, and finally Mewtwo V-UNION winning in Toronto, Canada. All of these decks were able to heavily capitalize on the state of the metagame following the Latin America International Championships, which had a Day 2 that was made up of an astounding 53% Lugia VSTAR / Archeops. As a result of this outcome, in addition to decks hyped up online, both in tournaments and on social media, many players came to the conclusion that the best three decks in the format were Lugia VSTAR / Archeops, Lost Zone Toolbox (both with Radiant Charizard and with Kyogre), and finally Mew VMAX. With the hivemind pretty much unanimously on the best three decks in the format, players were incentivized to try and beat those three decks with any deck that they could come up with, and all of the decks that won an event this weekend did this perfectly. However, while many players gave attempts, one specific group of archetypes did it in a way unlike anything else, that deck featured Emergency Jelly.

The Emergence of Emergency Jelly

Over the course of the last week or so, Emergency Jelly has, without a doubt, been one of the most hyped up cards in the Standard format, largely thanks to its performance at the Toronto Regional Championships. However, the card saw a small amount of hype leading up to the event. At the event itself, many players were quickly introduced to the power of Emergency Jelly with fellow writer Charlie Lockyer’s convincing victory on stream playing an Articuno / Radiant Alakazam deck. Created by yours truly, this deck was designed to use Articuno’s Wild Freeze to repeatedly paralyze the Defending Pokemon and to use Emergency Jelly to keep it from being Knocked Out itself, out while using Radiant Alakazam and Inteleon to fix damage in a way that results in Knock Outs being taken exclusively during your turn. This means that the opponent is permanently stuck in a position where they cannot attack for an entire game after your first attack. This deck is by far one of the most elaborate Articuno decks to come out of the weekend, as there were not one but THREE that we ultimately saw. In addition to the Radiant Alakazam build, we also saw a Frosmoth focused build take down the Brisbane Regional Championships as well as a Origin Forme Palkia VSTAR build that finished in the Top 8 of Toronto, just like the Radiant Alakazam build. With so many players that landed on the same general idea of abusing the combination of Articuno and Emergency Jelly, one has to wonder what happened in the metagame to get so many people to independently arrive at the same conclusion about the best deck to play this past weekend.

While I cannot speak for other groups’ line of thinking, I can at least do my best to shed a bit of light on how we got to the place we did with the Radiant Alakazam build. Prior to the Latin America International Championships, I had an idea that I messaged to several friends that was based on the synergy of Articuno and Emergency Jelly. It was frankly quite obvious, but the addition of Radiant Alakazam was less apparent. Initially, the theory with this was that Radiant Alakazam allows you to Knock Out 270 HP and 280 HP Pokemon VSTAR thanks to using Painful Spoons in the following way: 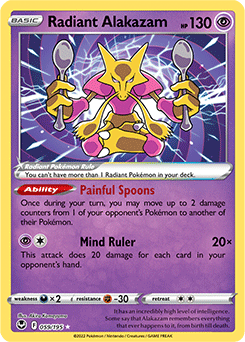 Or, on a more complex scale that only works for 280 HP Pokemon:

With both of these combos, I felt that I had an idea that could take down a Lugia VSTAR deck with ease and it really was just about beating the rest of the format. Unfortunately, this issue was a bit too big for me to deal with at the time, and I ultimately scrapped the idea. That was, until Charlie Lockyer reached out saying “If I can’t find an insane play for next weekend, I’m gonna cancel my trip,” and in an effort to stop him from cancelling, I revisited my Radiant Alakazam idea, and Charlie was sold almost instantly.

Over the next few hours, a group of mine and Charlie’s friends got together and got to work on trying to make the idea functional. The reason why we were so confident in the deck was because we could realistically build it to beat the three most popular decks, beating Lugia VSTAR decks without Switch using Articuno, beating Mew VMAX with two Drapion V, and Lost Zone Toolbox decks with Eiscue alongside Wash Water Energy. As a result of the bizarrely centralizing results from the Latin American International Championships, this strategy seemed pretty safe, with there being an estimated 23% chance of going 7-2 if 60% of the room was a combination of these three decks or as high as a 74% chance if the room was 80% filled with the big three. While the latter outcome was extremely unlikely to exist, it was a pivotal consideration point in understanding that the risk of only beating three decks was worth taking.

When it came to the event itself, the strategy of playing Articuno to beat Lugia VSTAR, plus other cards being used to beat the rest of “The Big Three” ended up being surprisingly popular across the world, but I believe the Radiant Alakazam build had one of the highest play rates and success rates, with nine of nine players who knew about the deck playing it, resulting in four Masters Day 2 Finishes, including Charlie’s Top 8, as well as producing a Champion in Seniors. For those of us who did well, the deck did exactly what it was meant to do, completely decimating the decks it was meant to beat throughout the weekend. On the flip side, the deck struggled against decks outside our expectations and resulted in some poor finishes for some of the players. In order to better understand this unique deck, how about we take a look at the breakdown for the list we used.