Silver Tempest is releasing in about a week, and it still feels to me like Lost Origin is a brand new set. However, time stops for no man. Looking ahead to the Latin America International Championships and December’s Regional Championships, we will be playing with Silver Tempest legal, so it’s time to start looking at the new stuff! In the each of past few sets, we’ve gotten one ridiculously overpowered card to have its own archetype: Giratina VSTAR and Origin Forme Palkia VSTAR are prime examples. Silver Tempest has one of these cards that is on everyone’s mind – that being Lugia VSTAR. 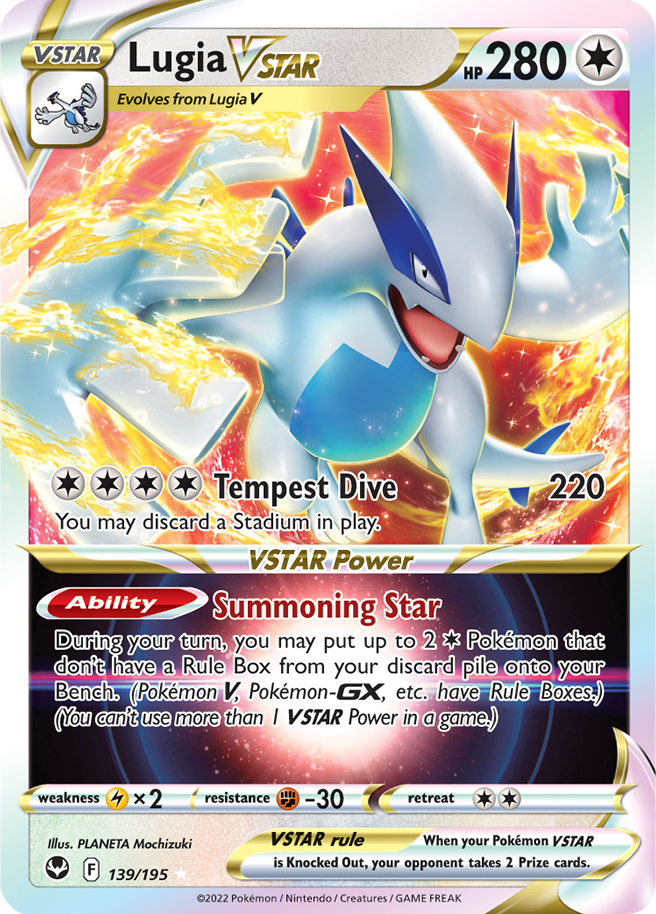 At first glance, Lugia VSTAR isn’t too crazy. Its attack deals 220 damage, but requires four Colorless Energy. Even with Double Turbo Energy, this is a steep cost for an attack that “only” does 220 damage. It has a side benefit of allowing you to discard any Stadium card in play. This attack looks okay, but it really shines due to its synergy with Lugia’s VSTAR Power. Summoning Star allows you to put two non-rule box Colorless-type Pokemon directly from your discard pile onto your Bench. This wouldn’t be that great, if it weren’t for Lugia VSTAR’s new partner in crime – Archeops from Silver Tempest.

Archeops allows you to search your deck for any two Special Energy cards and attach them to one of your Pokemon. It’s a Stage-2 Evolution Pokemon from a fossil, so the only way you will realistically put it into play is via Lugia’s Summoning Star. Summoning Star will always be used to get two Archeops into play, as Archeops is the only reason why Lugia VSTAR actually works as an attacker. It doesn’t take a rocket scientist to realize that these two Pokemon have perfect synergy with Powerful Colorless Energy. With several of those and a Choice Belt, Lugia VSTAR can easily one-shot any Pokemon in the format. Lugia VSTAR has 280 HP to begin with, and now gets the new V Guard Energy, making it difficult to be KO’d. Archeops can also find Gift Energy, which helps against Roxanne.

The fun doesn’t stop there! Archeops can also search out Aurora Energy and attach them to any Pokemon you want! This opens the door to play any type of Radiant Pokemon or Amazing Rare Pokemon. However, since Lugia VSTAR itself is so strong, there isn’t a much of a reason to get wildly creative. It would be cool to experiment with other Colorless Pokemon that Lugia VSTAR can summon, but since you can only use Summoning Star once per game, you always need to grab two Archeops. I have played a few games with only one Archeops in play, but that is only for emergencies when I cannot find the second Archeops and need to start attacking.

Unfortunately, the Lugia VSTAR deck is rather linear and one-dimensional in terms of gameplay. You activate Summoning Star as fast as possible and swing for tons of damage. It is surprisingly easy to get two Archeops in the discard pile, thanks to Evolution Incense being an easy search out. Once you have the Archeops in hand, there are tons of ways to discard them. The deck is a fast and powerful beatstick deck. Playing it is very reminiscent of Mew VMAX. The main difference between the two decks is that Mew VMAX constantly draws cards and needs to find combos, while Lugia VSTAR plays from the board once it is set up. Due to Archeops’s Ability and Gift Energy, the deck is incredibly low-maintenance once you’ve started attacking. It basically runs itself. You could argue the same for Mew VMAX, because Genesect V always gets you exactly what you need anyway. Mew VMAX is like Lugia VSTAR with extra steps.

There are a few ways to build the Lugia VSTAR deck, and there does not seem to be a consensus list for it yet. Lists from tournaments in Japan have shown a variety of ways to play the deck. Most builds have Radiant Charizard and Aurora Energy, because Radiant Charizard attacks for a low cost late in the game. This is good because Lugia VSTAR consumes a lot of Energy, so you might not always have enough for three attackers. Some versions play a toolbox of Aurora Energy attackers with cards like Yveltal or Raikou. Another version focuses more on Lugia VSTAR itself and consistency, playing cards like Capture Energy and Radiant Greninja. And of course, some builds mix and match these elements.