Hello PokeBeach readers! Isaiah here, and I am happy to be writing another article! Last time, I talked about Ian Robb’s Arceus VSTAR / Inteleon / Galarian Moltres deck from the Salt Lake City Regional Championships, and how I felt it could be a good play for the Indianapolis Regional Championships. On the other side of that event, I can say that I was certainly correct, as Ian Robb used an updated version of the deck not to just make Top 8 again, but to take down the entire tournament.

The new deck looked closer to the original list than it did to the deck list from my article. Ian and I discussed how the more complex build might be better for a tournament as large as the Indianapolis Regional Championships, as it gave Ian a chance in virtually any matchup he could face, even some unexpected ones, like the Arceus VSTAR / Beedrill deck that Isaiah Bradner played to a second place finish. As we move deeper into the Sword and Shield–Brilliant Stars format, it grows clearer and clearer that Arceus VSTAR is, without question, the best deck in format. As such, going into the New Jersey Regional Championships this weekend, many players are asking themselves the same question: how do we beat all of these Arceus VSTAR decks? While many players have pivoted to Fighting-type-focused strategies such as Rapid Strike Urshifu VMAX or the newly released Lucario VSTAR, I have a different suggestion: Ice Rider Calyrex VMAX. 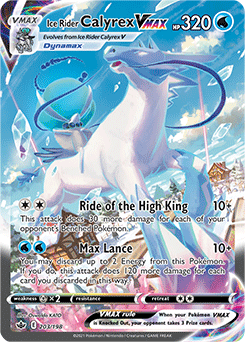 Since its release in Chilling Reign, I have always been fond of Ice Rider Calyrex VMAX. At the time of its release, the card was capable of spectacular damage, taking one-hit Knock Outs on most Tag Team Pokemon-GX, such as Pikachu and Zekrom-GX or Arceus and Dialga and Palkia-GX, and it was able to do solid damage against the viable Pokemon VMAX, including Rapid Strike Urshifu VMAX or Shadow Rider Calyrex VMAX. With the help of Inteleon, it could even reach the critical one-hit Knock Out range on those Pokémon, too. Ice Rider Calyrex VMAX was so strong that it even won an online tournament that was a sort of grassroots substitute for the World Championships. Following the rotation to Sword and Shield-on, however, Ice Rider Calyrex VMAX kind of fell behind the pack, with fewer excellent matchups against the top decks, especially after the advent of Jolteon VMAX and streamlined Zacian V decks. As time went on, Mew VMAX would also pose a threat, between Genesect V threatening a Weakness-boosted one-hit Knock Out and Power Tablet driving Mew VMAX’s damage output up to that magical 320-HP barrier. However, just went all hope seemed lost for Ice Rider Calyrex VMAX, Brilliant Stars came to give the deck a breath of new life.

In the past, I have talked about “HP brackets” in the Pokemon TCG, the general HP numbers that certain card types follow. For some examples, the HP bracket for Pokemon EX in the Black and White and XY Eras was 170 to 180, the HP bracket for Pokemon V is 190 to 220, or the Pokemon VMAX HP bracket is 310 to 340. These numbers signify central areas that many Pokemon of that category fit in, even though various exceptions may exist. Looking at Tag Team Pokemon-GX in the late Sun and Moon era, we see that their HP bracket is generally about 240 to 270, with Arceus and Dialga and Palkia-GX being the only meta-relevant Tag Team Pokemon-GX outside this range. As you may notice, the Pokemon VSTAR HP bracket is almost identical, being in the 250 to 280 range. As such, given its established success against Tag Team Pokemon-GX, we might reasonably expect Ice Rider Calyrex VMAX to do excellently against all of the Pokemon VSTAR, including the ever-prevelant Arceus VSTAR.

With that, how about we take a look at my take on the Ice Rider Calyrex VMAX deck going into the New Jersey Regional Championships?

In the online tournament space, many players have been exploring the potential of the Ice Rider Calyrex VMAX archetype with the new Brilliant Stars changes. Some of the top Ice Rider Calyrex VMAX players, such as Tate Whitesell, Le Bui, and Kashvinder Singh, have been major pioneers for the archetype in recent months, leading the way for others to follow in the footsteps of their deck lists. I’ve talked a bit about Ice Rider Calyrex VMAX with Tate, Le, and Kash, exploring how best to build the deck’s core more than anything. For the most part, this is pretty straightforward; most versions of the deck rely on Inteleon at this point. Another commonality is the inclusion of Path to the Peak to slow down Mew VMAX decks, but I actually decided to omit this card from my deck list. I did this with the goal of streamlining the deck a little more, making the deck more consistent at beating your good matchups, such as Arceus VSTAR, instead of trying to make one of your hardest matchups more playable. Even with Path to the Peak, you still need to run super hot (and your opponent needs to draw poorly) for it to matter, so we may as well just run even hotter and take the stronger good matchups that I already mentioned.