J Balvin is one of 12 artists who created music for the P25 Music album, which released today. Pokemon re-shared the story from Balvin’s Instagram account. However, it doesn’t appear to be up anymore.

The card has a special P25 set symbol of Pikachu’s tail and appears to be numbered #005/007. This means there’s six other cards, presumably depicting the other musicians. No further information is currently available.

We’re not sure if these cards were made specially for the musicians. Since Pokemon hired a TCG artist to make the artwork and even assigned the card a new set symbol, it seems they will release them to the public at some point. For example, a special vinyl edition of the album will release in February 2022 to celebrate Pokemon Day. The pre-order page doesn’t mention anything about promo cards, but there could be other promotions planned around that time.

This is not the first time a real person or human character has been turned into a Pokemon card. There are around a dozen examples. Some were exclusive releases intended for the person rather than the public, like Ishihara-GX. 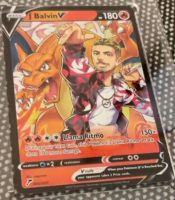