We can now read the full card text for Dark Sylveon V and Lance’s Charizard V! Previously, both promos were partially or fully covered up. 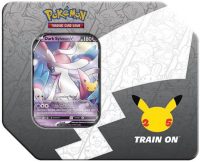 [P][C][C] Tricky Ribbon: 100 damage. Choose a random card from your opponent’s hand. Your opponent reveals that card and shuffles it into their deck. 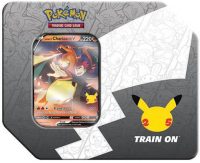 [R][R][C] Flamethrower: 200 damage. Discard an Energy from this Pokemon.

The two cards were revealed in Celebrations tins releasing in Singapore. The contents of the tins were not revealed.

We still don’t know how these tins will release in America, but they’ll likely be store-exclusives. So far we know of store exclusives for Gamestop and Amazon. Perhaps we’ll get our tins at Target or Walfart?