Hello everyone! Player’s Cup IV qualifiers are well underway, and while I know a number of you might have used up your keys, if you’re anything like me, you’re still slowly but surely grinding along. I’ve played a few decks on my run so far, including Rapid Strike Urshifu VMAX and Dragapult VMAX, but the deck I’ve had the most success with is actually Victini VMAX — specifically, an ever-so-slightly modified version of the Victini VMAX / Mewtwo and Mew-GX list that Gabriel wrote about a few weeks ago. Swap out the Professor's Research for Marnie and add in a Mega Lopunny and Jigglypuff-GX, and you’ll have what I’m playing — it’s a great deck that’s gotten me rep at a 3-per-key pace, so I do highly recommend checking out that article if you haven’t already!

One thing that I do find particularly enjoyable about this Player’s Cup is how diverse the Battle Styles meta is. There are a ton of different decks and strategies right now that you can succeed with; it isn’t like you’re trapped into playing, say, Arceus and Dialga and Palkia-GX or Eternatus VMAX. 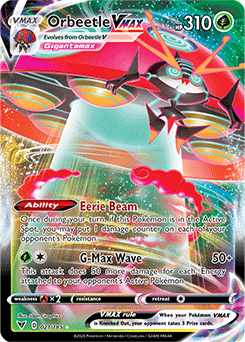 Given the ‘grindy’ nature of the Player’s Cup qualifiers, how much you enjoy playing a particular deck is a tremendous (and underrated) factor toward your ultimate success. That is, if two decks are otherwise equivalent in strength, you’re more likely to have success with the deck that you find enjoyable to play. This isn’t only because you’ll be more likely to finish your 50 keys — indeed, I know many players who started, but did not finish, earlier Player’s Cup runs because they couldn’t find a deck that they liked enough to spend their time playing — but also because you’ll be more likely to put in any testing time needed to have success with that more enjoyable deck. It is because of this often-overlooked factor that I will be talking about the deck that I am in this article: Orbeetle VMAX.

Orbeetle VMAX’s stall strategy can be a blast to play — if you’re the one playing it, of course! For players who prefer this style of deck, or for those who are looking to branch out from their typical style of play, Orbeetle VMAX is an excellent deck to consider. Its playstyle is a good bit different than that of the other meta decks, and so playing it can be a quite refreshing experience if you consider the Battle Styles meta otherwise stale. I do want to note, don’t confuse “enjoyable” or “fun” with “non-competitive” — it’s easy enough for a fun deck to be a great play and vice versa, and Orbeetle VMAX certainly fits both criteria. If you’re one of those players who hasn’t quite found a deck yet to grind with, you definitely want to check this one out.

For those of you unfamiliar with Orbeetle VMAX, the rough idea of the deck is to rack up damage with Eerie Beam, while using Lillie's Poké Doll to hide behind each turn while you spread your damage. Thanks to Battle Styles, and specifically thanks to the printing of Cheryl, the Orbeetle VMAX Stall strategy is as effective as ever.

Like before, your plan will be to continually use Eerie Beam before bouncing back to either a Lillie’s Poke Doll or a Snorlax. Now, however, you have the option to fully heal your Orbeetle VMAX if your opponent does use Boss's Orders to bring it up into the Active Spot, or if you decide to leave it in the Active Spot yourself. Like other Cheryl decks, if your opponent can’t OHKO you, there’s a good chance they won’t be getting any Prizes at all. To go even further, you can use recovery cards such as Cynthia and Caitlin and Munchlax to reuse those Cheryl, so not only can you use four Cheryl to repeatedly heal, but you can also get them back every other turn with Snack Search if you need to. Against decks that cannot OHKO an Orbeetle VMAX, the combination of Cheryl and Lillie’s Poke Doll means that you can effectively ignore eight turns of attacks, plus an additional turn every time you hit heads on Snack Search or use Cynthia and Caitlin. That gives you plenty of turns to spread damage with Eerie Beam.

It’s a wonderfully obnoxious strategy that’s capable of taking down many of the current meta decks, thus allowing Orbeetle VMAX to join in the fun of Standard.

In a format where games are typically done within five or six turns, the prospect of a deck that might need to use Eerie Beam 18 times to win might seem daunting — but this deck can and does win by doing so. It’s a slow, methodical process, but thanks to the additional healing from Cheryl, this deck is more than capable of grinding out a win.

This is the Orbeetle VMAX decklist that I’ve been using. It isn’t too far off from many of the other lists that I’ve seen running around, though there are a few personal tweaks:

Your Pokemon line is small, but that’s because you don’t need much more than this set of twelve. In most games, you won’t actually use all three Snorlax, but having three does mean that prizing one isn’t a big deal, whereas it would be a fairly large detriment if you did and were only playing two. 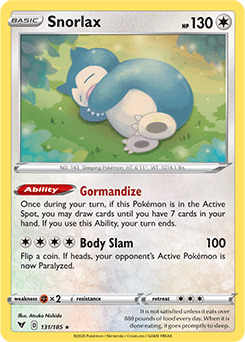 Likewise, you’ll rarely need a full 4-4 Orbeetle VMAX line, but having the fourth copy makes it easy for those games where you need to get three into play. The 4-4 line also increases your chances of drawing into the Orbeetle VMAX when you need to, which can be quite important against decks that play Chaotic Swell.

Finally, the one copy of Munchlax gives this deck more ways to recover cards and allows for the return of otherwise unrecoverable cards such as Weakness Guard Energy. Not every list I’ve seen plays Munchlax (in fact, a good number of them do not), but it is a valuable card. There are a few matchups for which it is critical, such as the Victini VMAX matchup, but it is rarely a liability outside of that — the recovery Ability is almost always going to be good. Munchlax also conveniently has a Retreat Cost of zero, making it easy to switch out of if you happen to start it. There are many games where you won’t opt to use the Munchlax — but it is definitely worth it for the matchups where you do.

There are a few other Pokemon that you can play that combo well with the Orbeetle VMAX strategy, such as Shadow Box Mimikyu, Heal Jamming Mimikyu, and Mr. Mime, but I don’t believe any of them are optimal to include unless you are teching for a specific expected metagame. One issue is that these cards only affect a few matchups, which means it is quite likely that they’ll be useless cards in most of your games. Additionally, if you are forced to start with one of these Pokemon, you’ll be at a disadvantage, since doing so will force you to use up either an Energy or a U-Turn Board. Furthermore, you won’t be able to bench more than one other non-Orbeetle Pokemon in this case, since doing so would give your opponent an easier way to win by letting them KO three non-VMAX Pokemon, as opposed to two heal-able VMAXs. This would mean that you might be forced to play the game with only one Snorlax, and without Munchlax.

If you’re expecting to see a lot of a particular deck that one of these cards is good against (such as Mewtwo and Mew-GX decks in the case of Mimikyu), then it is worth including one as a tech, but against a more varied field, I wouldn’t include them in the base list.