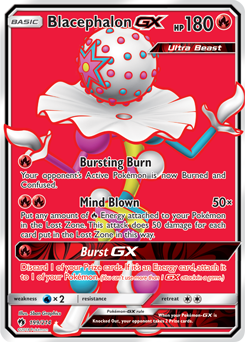 Hello everyone! This is Grant Manley here once again with my final article before the upcoming World Championships. While I’m still not entirely sure what I’ll end up playing, today I’ll write about one of my top picks – Blacephalon-GX. I briefly discussed this archetype in one of my previous articles when I was in the early stages of testing for Worlds. Over time, my list has evolved. In fact, I have two different versions of Blowns to go over today, though both use a similar consistency engine. The first one I’ll discuss is more tailored to beat Pikachu and Zekrom-GX, while the second is built to counter Malamar with Spell Tag. The anti-Malamar one is probably better overall because it counters Malamar a lot harder than the anti-PikaRom one counters PikaRom. It is also better against PikaRom than the anti-PikaRom version is against Malamar. However, the anti-PikaRom version is better in a vacuum because its tech inclusions are a bit less situational.

Anyway, Blacephalon-GX is in a great position right now. It’s fast, consistent, and extremely powerful. In fact, Blacephalon is the most powerful deck in the format with practically no damage cap. It can consistently OHKO Tag Teams. The deck is also linear and simple, which makes it easy to play. Additionally, it has solid matchups. I don’t expect anyone to be playing the new Tapu Fini, though that card is an annoying counter. Without further introduction, here is the first of my two current Blacephalon lists.

This deck is bonkers. It is so explosive and floods Energy into play easily with four Welder and four Beast Ring. The deck is simple. The strategy is simple. OHKO everything every turn with Mind Blown. The deck is built to be as fast and consistent as possible. I’ll elaborate more on this a little later, but cards like Persian-GX, Naganadel-GX, Ninetales, Custom Catcher, and Reset Stamp are all atrociously bad in this deck. When this deck works, it beats everything and blows up your opponent’s Active every turn. Therefore, consistency cards are techs for every matchup. There is no need for excess baggage. Though this list is very straightforward, let’s talk about some of the less-obvious card decisions.

I actually still think that three Dedenne-GX is reasonable because you often end up using both of them in a game. With the current count of two, it’s unfortunate if you prize or discard one because then you only get to use one. However, I chose to be a little greedy with the low count of Dedenne because it seems like the most forgiving card to do that with. I can’t see myself getting away with cutting anything else in this version besides potentially Fire Energy or Pokégear 3.0. Would I rather have a third Dedenne over either of those cards? Probably not.

Some lists only play one Dedenne and that is a criminal offense in my opinion. Dedenne is a core part of the explosiveness of the deck. It enables strong setups, helps find specific pieces when they are needed (like Beast Ring), and is honestly a broken card overall. 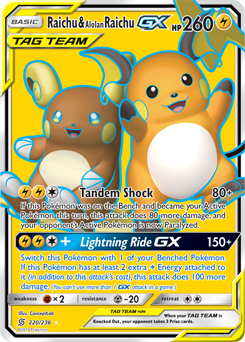 I am talking about these cards together because they are both techs for the Pikachu and Zekrom-GX matchup. Without Switch, the PikaRom’s game usually begins by using Full Blitz to power up Raichu and Alolan Raichu-GX. Then they use Tandem Shock to paralyze a Blacephalon so that they can finish it off with Zapdos, thus leveraging the prize trade. However, if you have Switch, you can Switch out of paralysis and KO the Raichu. This invalidates that strategy and forces them to use Tag Bolt GX to leverage the prize trade (and potentially skip Beast Ring turns). However, Mew offers a safeguard against that option. PikaRom cannot usually spare a turn to KO Mew with Custom Catcher, so long as you don’t play it down too early. Switch is also helpful if they happen to use Dedenne’s Tingly Return GX.

Switch is also incredibly helpful against Darkrai Prism Star. Darkrai single-handedly slaughters Blacephalon when it sticks the Abyssal Sleep, which is a 75 percent chance. If you don’t have the option to Switch out of sleep, Darkrai buys an extra turn to set up, takes a KO with a non-GX (which leverages the prize trade), and forces Blacephalon to send four Energy to the Lost Zone just to take it out.

Finally, Switch is useful overall because it’s Switch. It preserves an Energy if you start with something that’s not Blacephalon. It can also be used to pivot into Blacephalon in the Malamar matchup because you want to stagger the Blowns whenever possible to avoid pings from Distortion Door and Spell Tag.

There isn’t a whole lot to say about Acro Bike besides just play the darn card! Acro Bike is absurdly good right now. It thins the deck and helps dig for cards. It drastically improves overall consistency and this deck usually doesn’t mind the discard effect. I would not consider playing fewer than four Acro Bike in most decks right now, and Blacephalon is no exception.