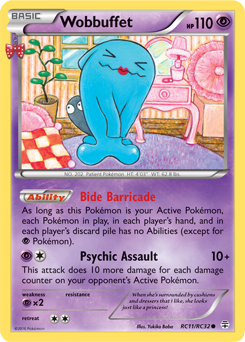 A card that has one of the oddest histories of any other card in Expanded is Wobbuffet. First a meme, then a viable counter to Shaymin-EX, then an out to Archeops, followed by a long string of obscurity to now; today, a new lease on life. With the Expanded format being dominated by Zoroark-GX, specifically builds that can abuse Oranguru and its Resource Management, Wobbuffet has seen some recent hype as a way to disable Trade for some decks, and for others as a wall to mill behind. Two decks come to mind regarding potential for Wobbuffet right now: a partnership with mill decks with Tropical Beach and as a wall for a Hitmontop deck. The goal of this article will be to introduce each of these concepts and spill the beans on a deck that might see a showing in Dallas. Wobbuffet is best paired with control concepts, so you’re sure to see a blend of control in both of these decks.

Let’s start with Hitmontop: a descendant of Donphan with Spinning Turn. Hitmontop is much better for a variety of reasons. Rapid Spin hits for 30 damage, which is not much on its own, but it forces your opponent to switch their Active Pokemon with one of their bench Pokemon. This is disruptive in certain situations, forcing a switch which might draw out resources that will be missed. The downside of Hitmontop is that it does a less damage, has less HP, and lacks the attack of Wreak. Triple Kick isn’t awful, but it’s flip-based damage so nothing is guaranteed. This deck might seem odd or under powered, but with so much of Expanded reliant on Abilities, a Wobbuffet deck that can attack is positioned as good as a mill variant.

The coolest thing is that you can play other walls to help out other matchups and there’s a lot flexibility with the list to make sure that you fit all that you want. I like to mix Hitmontop with not only walls, but control concepts to make it harder for your opponent to win games by targeting Hitmontop itself with Guzma. With 80 HP, it’s important to defend yourself against plays of that sort.

Don’t sleep on Wobbuffet BREAK as an HP boost for any deck playing Wobbuffet. I think many of us have forgot about it and I made sure to put one in this deck when I started testing it. The extra HP allows you to survive more attacks and also plays around Silent Lab or Alolan Muk against decks that are trying to use the Abilities of Stage-1 or Stage-2 Pokemon. Either reason is value enough to warrant at least one of these, I’m always looking for space for another if I can fit it. 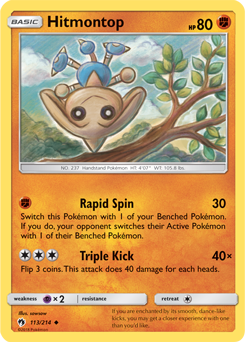 Why not four? I have a Rescue Stretcher for a fourth if things go down. This deck operates in a way that it will be difficult for your opponent to target down Hitmontop from the Bench. As an option, playing a Focus Sash or two would make a lower count of Hitmontop, a possibility making it impossible for your opponent to one-shot it without a Field Blower in addition to Guzma, a hard combo to pull off. If your opponent invests all their resources into targeting your Hitmontop on the Bench then you’ll be better equipped to run into Oranguru and start looping with Resource Management. A lot of VS Seeker are required to take down multiple Hitmontop back to back to back.

This deck wants to create a loop if it ever needs to, and with so many one-ofs and important cards like Float Stone able to be discarded by your opponent, having a viable mode of recovery is a must. This list includes all the necessary techs in order to loop Oranguru infinitely to the point of decking your opponent out if desired.

A hard counter to Trevenant BREAK decks, if your opponent isn’t playing Alolan Muk you will almost certainly win the game outright since your opponent shouldn’t have a way to damage your Latias-EX through its Ability. If Alolan Muk is played then you’re in a weird spot, but as long as you have Wobbuffet Active when Ditto Prism Star is played then it can’t be played. Once the Ditto Prism Star comes down you’ll be hoping to have Guzma to one-shot the Ditto Prism Star with Rapid Spin, if you can do that, then Latias-EX can chill for the rest of the game. If it comes to it, you can go into Oranguru moving things around with AZ, get some resources back, run your opponent out of cards and win.

If a Wobbuffet goes down then your opponent better be looking alive. You can play Red Card and Morty in succession and completely dismantle your opponents hand in one fell swoop. This is the best deck to abuse this combo as Wobbuffet is almost always going to be your Active at the end of your turn with a chance of being Knocked Out.