PokeBeach’s January TCG Cup is over and the winners have been crowned!

The tournament was played in the Standard format, which at the time was XY through BREAKthrough. Check out the full details in the original news story.

Coming in 1st place is one of our favorite TCG players, Andrew Wamboldt! He will be walking away with a BREAKpoint booster box from TCGplayer.com.

We sat down with the St. Louis player for a brief interview.

What deck did you play for the January TCG Cup and why did you decide to play it?

I played Kevin Kobayashi’s Manectric-EX / Crobat deck. I wanted something that was very strong against Night March decks while also having decent matchups against most of the other top decks in the Standard format.

Seismitoad-EX was probably my favorite card in the deck. So many of the decks that people are playing in the Standard format are so reliant on Item based draw engines, so if your opponent stutters when getting setup in a game, Seismitoad gave the deck an option to completely lock them out of the game. 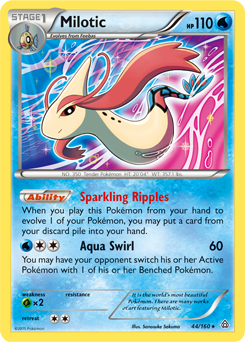 My most exciting individual game was the last game of the tournament against the Night March / Milotic. I had started a lone Zubat in hand with most of my VS Seekers and didn’t draw much of anything. I used Hex Maniac and passed. My opponent misread their hand and could have won the game, but instead only was able to do 40 damage on my Zubat. I was able to evolve into Golbat and continue using Hex Maniac for a few more turns with all my VS Seeker. I would get another Zubat off my prizes to evolve into another Golbat, and then eventually I was able to take three prizes in one turn to win the game when I drew into a Manectric-EX and Crobat.

As far as most exciting match, that would be against the Night March / Vespiquen deck. All of the matches were super close, and the two games I won came down to being able to do exactly the amount of damage I needed to do between bat damage and Manectric-EX to win the game.

I would take out the Giovanni’s Scheme for a Shauna. It was difficult to find good opportunities to actually play Giovanni’s Scheme for the extra damage effect, and as a draw Supporter, Shauna is much better. I found myself in a lot of situations where I couldn’t do much late game because I would deck out from playing Professor Sycamore, and my hand was too big to draw with an AZ on a Shaymin-EX, so a Shauna would have been good in those situations to get at the last few resources hiding in my deck without decking out.

A second Lysandre would be good as well, but I can’t think of anything I would want to cut out to fit it into the deck.

Entei decks can be very difficult because they can easily 1HKO anything in your deck and have the non-EX prize trade to make with you. I don’t think the deck is hard countered by many decks, but rather by certain card choices players include in decks. The Battle Compressor decks that swing for big damage for a Double Colorless Energy can be tough to beat when they string Hex Maniac on consecutive turns to shut off your bats’ Abilities. Additionally, Parallel City can be oppressive against the deck as you won’t be able to bench very many Crobat lines.

The deck is fairly solid against most EX decks as Assault Laser and some Crobat damage will make for OHKO’s if they have a Tool on their Pokemon. Night March is also a pretty good matchup since you can take advantage of their low HP for knockouts with Overrun and the Crobat line’s Abilities. 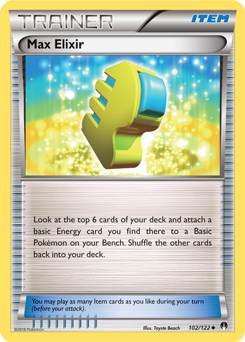 How does BREAKpoint affect your deck? Is it still viable with BREAKpoint in the format?

It can be built with Max Elixir‘s to power up Assault Laser in one turn, which can be very strong. The deck needs to be re-constructed to play more Basic Energy to make proper use of the card, but in an EX heavy metagame, a Max Elixir version of the deck would be very good.

The deck will probably be a solid Tier 2 deck in Standard for awhile, but I think BREAKpoint is tough on the deck because other decks are going to start seeing some growth in their power with the new cards more so than Manectric-EX / Crobat deck will.

Are you a PokeBeach premium member, and, if so, why did you decide to become one?

Coming in 2nd, 3rd, and 4th places were Ashley Williams (SerenityNow from the forums), Grant Manley (grantm1999), and Elliot Sayles (elbow). Each have won a bunch of BREAKpoint booster packs. Their deck lists can be seen here:

Everyone in the Top 32 of PokeBeach’s monthly tournaments will also receive Prize Wall points via e-mail. Be sure to check your inboxes soon!

As part of the tournament, PokeBeach’s article writers voted for the premium members who they felt used the most creative deck lists.

Yog, saxmaster69, Mora, ironcladmerc, and stingrea each walked away with several BREAKpoint booster packs or a Pokemon TCG Premium Collection from TCGplayer.com. The decks we saw these players use include Wobbuffet / Crobat, Greninja / Miltank, Gallade / Octillery, M Gardevoir-EX / Whimsicott, and Manectric-EX / Seismitoad-EX / Zoroark.

For every tournament, the top five premium members who come up with the most creative decks will win booster packs and promo prizes.

March’s tournament will be posted on March 1st, and February’s tournament is currently underway. Each tournament awards up to four booster boxes of product to top finishers plus promo products and additional booster packs to premium members.

February’s Blog Competition is Almost Over – Who Will Win?

Don’t forget that PokeBeach’s February blog competition is still underway! The TCG fan who posts the most popular article will win a whole BREAKpoint booster box from TCGplayer.com!

If you want to participate in the competition, check out this page for more information about writing blog articles. There will be a new competition every month, so you will always have the chance to win a booster box!

All of these prizes are brought to you by TCGplayer.com. Their online store offers the cheapest Pokemon cards on the Internet from thousands of different sellers – you will find no better deals! So be sure to check them out any time you want to purchase or sell Pokemon cards!

In the future, you can always use our navigation menu to access their store.