A la Parallel City, the official Japanese Pokemon Twitter has revealed another dual-effect Stadium card – Reverse Valley – which will premiere in Rage of the Broken Sky. Thanks goes to Jake C. and Hannes S. for the translation! 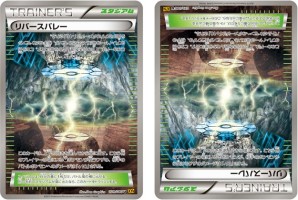 Blue Side: Choose which way this card faces before you play it. This ↓ player’s Metal Pokemon take 10 less damage from his or her opponent’s Pokemon’s attacks.

Red Side: Choose which way this card faces before you play it. This ↓ player’s Darkness Pokemon’s attacks do 10 more damage to his or her opponent’s Active Pokemon.