As we all know by now, TPCi announced Monday that, in spite of all previous implications, they were choosing to take an active role in the progression of the game. In the midst of an in-progress competitive season, they suddenly banned a card considered by many to be a staple in competitive play: Lysandre's Trump Card. This is the first time we have ever had a card banned in 14 years for its utility and power; needless to say, this announcement caught most players’ attention. Aside from the lack of precedent, many players have begun speculating on what this change will mean for the game, specifically the National and World Championships. There are many questions to be answered, like “Why Trump Card?” and “What does this mean for me?” and especially “Why wasn’t it Seismitoad-EX/N/Hypnotoxic Laser?” and on and on and on. Worry not, dear reader; this article is here to answer your questions and put your fears to rest. Or, at the very least, I’ll let you know what exactly it is we have to be afraid of from this uncharted new territory in Pokémon history. 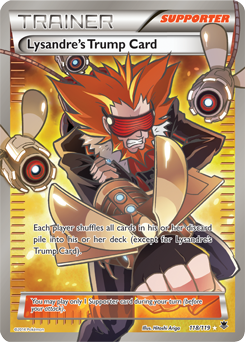 If you had asked any Pokémon player on May 31st what card should be banned from competitive play, I guarantee you nobody would have listed Lysandre’s Trump Card as their first choice. Aside from being the arguably best-looking FA Supporter in the game, Trump Card doesn’t exactly stand out as a frontrunner for, well, anything really. Honestly, it isn’t a card many would think of as being broken; the effect is good, but it’s your Supporter for turn and doesn’t draw you any cards. Besides, after the first play, (or second, if your deck runs a second copy) you need to play a VS Seeker to even retrieve it (impossible under Item lock) or you need to reset your discard all over again for those often critical VS Seeker plays. Also, it seems to be balanced; it can be as advantageous as it can be disadvantageous, as I’m sure many a Flareon and Night March player have lamented. Besides, there are other cards in the format that are way more toxic than Trump Card: Hypnotoxic Laser, Seismitoad-EX, Crushing Hammer, and N quickly coming to mind. So, in conclusion, TPCi banned the wrong card and we all have to grumble about the change and minor inconvenience until the end of the season, right?

The change was big. Bigger than big. It will affect almost every deck to come out after Roaring Skies. Why? Because, as a player, you now have a responsibility that you could easily neglect before, a responsibility that we seem to have thrown out the window since Trump Card was released, a major responsibility that, like taxes, was withheld from us for a short time only to come back and slam us when our crutch was removed:

You have to not deck out.

“Well, duh, Christina; everyone knows that. What kind of idiot would deck themselves out?” Great question, obnoxious figment of my imagination: Who would do that? What kind of player could possibly burn through resources as quickly as possible, knowing that, when the time came, Lysandre’s Trump Card would be there to save them from a disaster of their own creation?

Yeah, I thought of a few decks too.

With the introduction of Roaring Skies, the scale was finally tipped completely in the favor of Item-based and Ability-based draw. With the addition of cards like Shaymin-EX and Trainers' Mail to the format, along with cards like Acro Bike that were already here, we have suddenly gained a huge new engine with which it is relatively easy to go through our deck. Such support killed the need for many Supporters, several players dropping the previously sacred counts of 4 Professor Juniper and 4 N to 2 Professor Juniper and 1 N. Supporters quickly just became too slow, and the metagame shifted in response: Item lock decks like Seismitoad-EX / Shaymin-EX and Shaymin-EX / Trevenant saw huge popularity in this weekend’s Regional Championships, both decks that abused new draw and shut down the draw of the opponent. The much feared Colorless M Rayquaza-EX, which could easily go through half the deck on the first turn, either struggled against early Item lock or dominated any other adversary with its fabulous speed and power, once again thanks to these new cards. 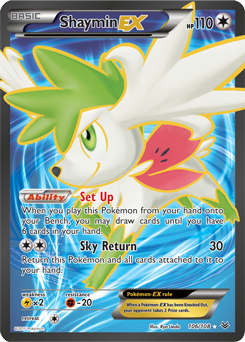 “Okay, I get it. Draw is crazy. Toad sucks. What does this have to do with Trump Card?”

Well, everything, actually. With Trump Card, a player could easily run through their deck twice over, with no fear of deck out or losing important resources. Now, without it, the draw must inherently be more conservative. You run out of cards, you lose, it’s as simple as that. Therefore, dropping that extra Shaymin-EX might not be such a good choice, especially if you already dropped two in this turn alone. Toad can no longer use Crushing Hammer on every Energy it sees; it will have to be more strategic in its attempted Energy removal. The same goes for Hypnotoxic Laser; no longer will a player feel comfortable in continuously playing Lasers hoping for heads on the sleep flip; they will no longer have the opportunity to reuse those Lasers to infinity, and hence must be more careful with them.

Basically, Trump Card was the glue that held the strategy together. Without it, the reckless draw is, well, just too reckless. By banning Trump Card, TPCi is trying to rein in its own monster: the bigger and better draw cards it seems to love to release with every set.

What Does it All Mean?

Well, I feel that TPCi has just made a very strong statement in the way they want their game to evolve (heh, get it? evolve? no? okay). They basically just slammed the breaks on a situation that was admittedly beginning to spiral out of control. As they explained themselves on the official post:

This card has created an undesirable play environment because it:

Most important to note are the two situations in the middle. The repeated use of “powerful Trainer cards,” such as Crushing Hammer, Hypnotoxic Laser, and ACE SPEC cards like Computer Search, make decks like Seismitoad-EX incredibly powerful and dominant in a format. The “drawing through your deck” as previously mentioned, created monsters such as Shaymin-EX / Trevenant and M Rayquaza-EX that can go through their decks on a whim with no fear of repercussion. 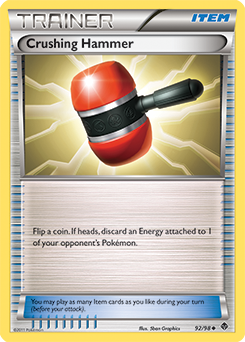 All, however, is not lost for heavy draw. After all, Shaymin-EX is alive and un-banned. The ban of Lysandre's Trump Card has just created an environment where a player must consider his or her remaining resources before going all-in on heavy draw.

Also to be considered are the benefits of such an action to decks like Night March, who previously suffered from an opponent’s Trump Card, now left to roam free with as many turn one Battle Compressors as they could possibly wish for. The only consideration is the late game, where they might run out of cards if they aren’t careful.

In conclusion, some decks will die upon the ban of Trump Card, and others will wither, but hold on, as a mere shadow of their former glory. Still others will rise to new heights upon the winds of this breathtaking change. As the cards change, so must we. We will have to play more conservatively, with less reckless abandon for our resources and more careful consideration of our moves. No longer is the play that nets the most cards inherently the best play, but rather a consideration against the ticking timer of the dreaded deck out. We, as players, will ultimately benefit from this change, but this also leaves us the question: is this a lone occurrence? Or will TPCi soon begin taking a more active role in the game? Are there more bans to come? Only time will tell.

As for me, I’m interested in seeing how exactly this new involvement will change our game. What do you think? Feel free to leave your thoughts; I can’t wait to read them.

Until next time, this is Christina Pendergrast, signing off.