We now have news that on October 9th, a 60-card deck called “Break Battle Deck: Golduck Break + Palkia-EX” will be released. The product image says “Use the Break Evolution and Pokemon-EX combo to achieve victory!” The deck will also come with a rule book, damage counters, coin, and playmat, all for 1,556 yen.

With the description above, it now seems that Break Evolutions are a thing like Pokemon-EX and Mega Evolutions. We have Golduck Break, Raichu Break, and Noivern Break. Now the question is what does the mechanic mean? Pokemon-EX are Basic Pokemon that are more powerful and give up two Prizes. What will Break Evolutions be? 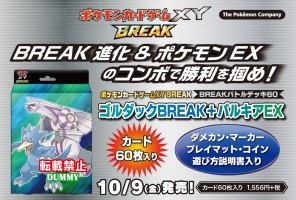 But that’s not all on the roster! On November 20th, a “Double Mega Break Set: M Aerodactyl EX + M Mawile EX + Luxray Break” will also be released. It’ll come with five booster packs of each mini-set and 14 original cards, all for 2,000 yen. 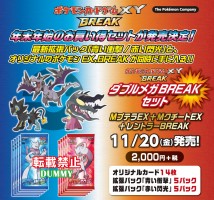 With both these products, we now know that Pokemon-EX, Mega Evolutions, and these new Break Evolutions will be part of the new XY: BREAK block. Exciting times are ahead, and still a lot of questions!

Thanks goes to Franco T. for the translations!