A new “Kalos Starter Set” will be released on November 8th, the same day as Legendary Treasures. Each deck will feature either Chespin, Fennekin, or Froakie, will come with 60 cards, and will include a Black and White series booster pack. These will replace the usual theme decks that would have been released under normal circumstances with Legendary Treasures in an effort to hold fans over until the first X and Y set comes out in February. 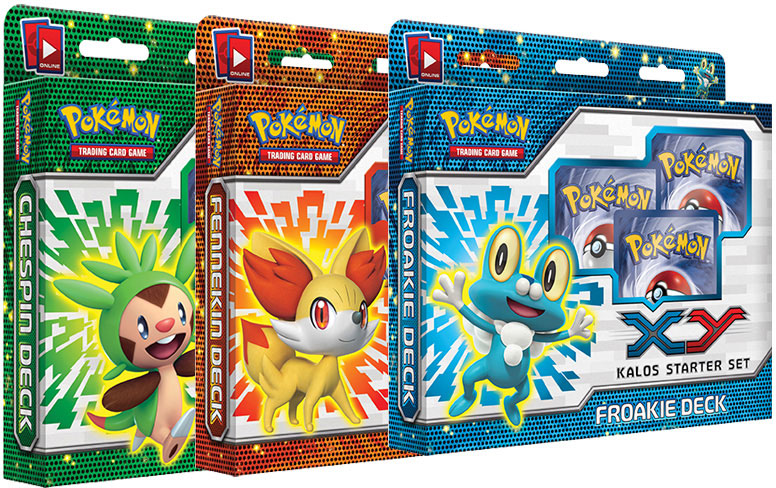 First appearances from long-awaited Pokémon and a brand-new battle strategy! Which Pokémon will you choose to begin this exciting journey: Chespin, Fennekin, or Froakie? Pick your Pokémon and get ready to battle!

Start your adventure in the Kalos region with the Grass-type Pokémon Chespin and this 60-card ready-to-play deck! With spikes, toughness, and resilient Grass-type moves, this new deck is perfect for the small but fierce competitor who never gives up! With quiet strength, it grows and grows to outperform and outlast the competition! Plant the seeds of your future victory start with the Chespin deck!

Fennekin Deck— Burn Up the Opposition!

Start your adventure in the Kalos region with the Fire-type Pokémon Fennekin and this 60-card ready-to-play deck! This new deck unlocks a world of exciting Pokémon battles and gives you the head start you need to battle and win in the Pokémon Trading Card Game! As a Fire-type deck, the Fennekin deck is full of powerful moves—grab it and blaze your path to victory!

Start your adventure in the Kalos region with the Water-type Pokémon Froakie and this 60-card ready-to-play deck! This new deck leaps over the competition with Froakie’s unexpected powers, including all the shifting speed and thrilling moves that Water-type Pokémon are famous for! Move like a roaring river and carve your channel to victory— grab the Froakie deck and get ready to play!