According to a new Pokemon ad running at GameSpot, Genesect will be available to English Black 2 and White 2 games via Wi-Fi starting October 7th, the day the two sequels are released in North America. It will likely match its Japanese counterpart, which comes with Techno Blast, Magnet Bomb, SolarBeam, Signal Beam, and no held item. The download will last until November 12th.

Now that Keldeo’s distribution is going on at Gamestop, and Genesect’s is coming up, what about Meloetta, which sits between them in the Pokedex? Maybe it’ll be available for download whenever its movie short comes out? Furthermore, what’s with the rush to get the fifth generation over so quickly? 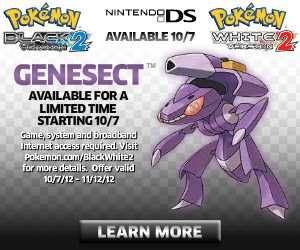