Sorry for not posting yesterday like I said I would. A few things came up after school that I had to deal with until today.

Bangiras has fully translated the first part of the Arceus: Space-Time Conquered movie summary from the Pokemon movie website, including the character biographies. 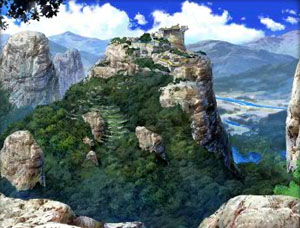 Continuing on their journey, Ash’s party arrives at “Michiina,” a riverside town surrounded by flourishing nature. In this town are the countless millenia-old ruins of a temple, and Ash and friends start towards the ruins, which are on top of a huge, rocky mountain. Doing so, they find that there is a big lake at the peak of the mountain, and the ruins stand beside that lake. Ash and friends admire the beautiful lake. Then suddenly, the waves of the lake crash noisily and come together into a water-tornado that bears down on Ash and co. Just when it looks like the tornado is going to grab them, a girl flies into view with a cry of, “Dialga, please!” In the next instant, Dialga appears!

The woman’s name is Sheena, and she is the guardian of the ruins. She explains that she has the ability to communicate with Pokemon and with people’s hearts. Sheena invites Ash and friends to the ruins, and explains about the “Laws of Time and Space” used by Dialga and Palkia, and Giratina’s dimension. Then, she begins to tell the old legend of Michiina Town. It all began long ago, when the illusionary Pokemon Arceus – who is said to be the creator of everything – threw itself in front of a meteorite, and saved many Pokemon. 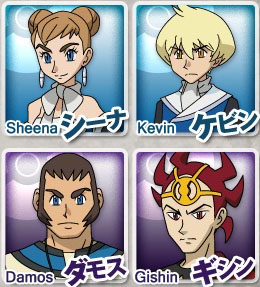 Damos (past character): He saved Arceus after it fainted from protecting the world from a meteor. In order to make the ruined land of Michiina flourish, he was entrusted with the Life Jewel by Arceus. But, he betrayed Arceus by not returning the jewel on the promised day.

Gishin (past character): Damos’ underling. He uses Pokemon equipped with magical devices. He has a lot to do with Damos’ betrayal of Arceus.

Sheena (present-day character): A guardian of the ruins, she is a descendant of the Damos line, which has been protecting the Life Jewel for generations. She plans to calm Arceus’ rage by returning the Life Jewel, which Damos neglected to return millenia ago. She has the ability to communicate with Pokemon and with people’s hearts.

Kevin (present-day): Like Sheena, a guardian of the ruins. Along with Sheena, he teaches Ash and friends about the old legends of Michiina Town.

Gizamimi Pichu: An energetic and somewhat precocious girl, she’s called “gizamimi (notch-ear)” by everybody because of the cowlick on her left ear.

The Life Jewel: What is the Life Jewel? The “Life Jewel” that’s supposedly been lent to Damos by Arceus is a jewel that draws the power of “Water,” “Grass,” “Ground,” “Lightning,” and “Dragon” from among the 16 wells of life in Arceus’ own body. Could the shining, orb-like item held out by Damos on the movie poster be a Life Jewel? (This last sentence is not our speculation: the movie website asks it.)

Arceus: What is Arceus’ rage? Because Damos betrayed Arceus by not returning the Life Jewel on the promised day, Arceus went into a long sleep, clinging to a horrible anger and saying, “The next time I awaken I’ll pass down judgment on all of humanity.” Damos’ descendant Sheena plans to return the Life Jewel to Arceus, but…

Speculation: This movie is going to be so exciting! Damos appears to take the blame for the betrayal of Arceus, but based on Gishin’s evil hair, evil red color, and evil eyes (don’t judge a person based on their looks, butttt), it might not be out of the realm of possibility for him to have done something to sabotage Damos and Arceus.