Dang… we have had an update every other day to every day (mostly the latter). When is this surge of news going to stop? PokeBeach sure has featured a lot of exclusive news lately, with us posting most of the news first! I hope this trend continues, even if I have to sacrifice some school time in the process. :p More people should know about this site and all of the news we post, so spread the word to your friends! They don’t have to like the TCG to come here… we cover all aspects of Pokemon in the news.

If you did not come here yesterday, be sure to read the previous news story regarding [DP5: Temple of Anger, Cry from the Mysterious].

Giratina’s Origin Form and New Battonage Info Revealed! – Scans of the March issue of Coro Coro have revealed Giratina’s “origin” form and additional information regarding both Giratina in movie 11 and Pokemon Ranger Battonage! Click the thumbnails below for larger images, and read the paragraphs below them for explanations of each page. 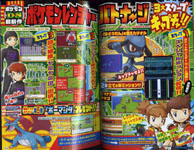 The first page just shows off Shaymin and its Seed Flare attack, like with the Famitsu magazine scan.

On the second page with Giratina’s origin form, the guy on the right is asked, “Can Giratina fly?!” and he says, “I’ve seen it… that guy flies around freely!” They ask the guy on the left, “It doesn’t exist in DP?! [Giratina’s origin form]” and he says, “The origin form isn’t in the game. I wonder why!?” Could Giratina be like Deoxys in that it has additional forms in future games? Could this foreshadow Giratina as the possible mascot of the Diamond and Pearl remake game? Who knows? Giratina’s new form looks very snake-like / spinal cord-y.

The third page shows anime art for Magnezone and Shaymin, and confirms the story we posted yesterday about Ash’s Turtwig and Chimchar remaining unevolved.

The fourth page on Pokemon Ranger Battonage confirms the rumors that were floating around yesterday on being able to send over a Riolu (as a Pokemon, not an egg) and a Manaphy egg to Diamond or Pearl. Riolu will know Aura Sphere, even though it cannot learn it normally until it evolves into Lucario. To get the Manaphy egg, the mission to obtain it will be almost completely identical to the mission players had to complete in the first Pokemon Ranger game. An even bigger surprise in Pokemon Ranger Battonage is that you can go on special missions where you capture Pokemon, and you can then send them to Diamond and Pearl! The details on this are vague in Coro Coro, but more facts should be revealed soon!