EDIT: Scans of the Holon Phantom cards added, along with the set’s booster pack.

Oh my gosh, just ONE more day left until FREEDOM. I hope it goes by so fast that when I blink, it will be tomorrow! *blinks*

Vincent has kindly translated for us two cards out of the Holon Phantom set! 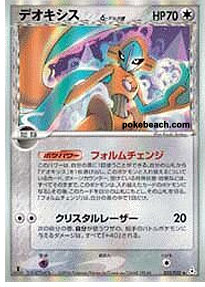 Deoxys (Normal) (Delta Species) – 70 HP (C)
Poke-Power: Form Change
Once during your turn (before you attack), you may search your deck for another Deoxys and switch it with Deoxys. (Any cards attached to Deoxys, damage counters, Special Conditions, and effects on it are now on the new Pokemon.) If you do, put Deoxys on top of your deck. Shuffle your deck afterwards. You can’t use more than one Form Change Poke-Power each turn.

[CC] Crystal Laser – 20: During your next turn, any attack damage done to your opponent’s Active Pokemon by Deoxys is increased by 40. 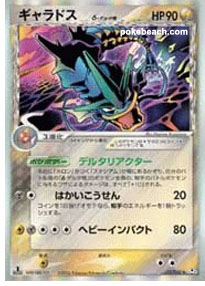 Gyarados (Delta Species) – 90 HP (ML)
If there is a Stadium card in play with Holon in its name, all damage done by your active Delta Species Pokemon to your opponent’s Active Pokemon is increased by 10.

The booster pack can be seen by [clicking here].

I failed to reference this in my rant the other day when I was talking about Lucario’s name:

Click the link. It is a product from the official Japanese Pokemon Center’s website. As you can plainly see, unless you have been infected with the “green” virus, it says “LUCARIO.” If you still think it is Rukario, I will smack you so silly that you will be laughing to your death.

Keep sending those votes in! So far, the top three things most wanted are scans, fake card blanks, and the modified carddex updated. Voting ends later on today. Since scans are the sure winner due to the overwhelming number of votes for them, you might want to start thinking about which set you want me to have done by Sunday, your choices being EX R/S, EX Sandstorm, and EX Dragon. Don’t vote yet on the specifics though, since I will be putting up a poll for that.